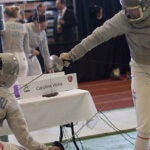 Robin Kelsey is a different sort of historian, writing and talking about what we see in recorded images

For example, there was a short stint in the mid-1990s as a lawyer.

“I really didn’t enjoy law practice,” Kelsey conceded. “I love argument, I love debate, I was an intensive debater in high school, did some debating in college, and actually ended up coaching the Yale debate team when I was in law school. But I also love writing about pictures, and find that pictures draw me in a way that just working with text doesn’t.”

Fast forward to 1999, when Kelsey was a Ph.D. student in Harvard’s Department of History of Art and Architecture. Attending a professional meeting, he couldn’t find a panel on landscape painting, the focus of his own dissertation, so he opted to speak at a session on landscape photography, presenting a talk on 19th century photographer Timothy O’Sullivan.

In short order, Kelsey shifted gears, producing a dissertation on O’Sullivan’s photographic survey of the American West following the Civil War. A year later, weighing Harvard’s offer of a junior faculty position as a historian of photography against offers from elsewhere in American art more generally, he again felt that the stars were aligning to nudge him toward photography.

“So I leapt into this professional formation of myself as a photo historian, which was a steep learning curve since I had never done any graduate course work that was directed toward history of photography,” he said.

Kelsey’s reinvention reached its denouement last year when he received tenure, becoming the Shirley Carter Burden Professor of Photography. He doesn’t regret the long and winding road to where he is today.

“I feel very lucky to have been able to experience that formation,” he said. “I had the post-1960s view that finding one’s calling could be a very long process. I think it would be very hard now to do what I did. Young people these days feel much more urgency to get their lives sorted out.”

In retrospect, a few threads in Kelsey’s childhood might have foreshadowed his ultimate destination. Both his mother and stepfather were anthropologists, at Hamline University and the University of Minnesota, respectively. Cameras were indispensable in documenting their fieldwork on Indian reservations and in Mexican villages, often with some of their six children in tow.

“My grandfather was a very serious amateur photographer, with a darkroom,” Kelsey said. “I spent time in there, and was fascinated by the equipment and the process.”

A product of public schools in Minneapolis, Kelsey thinks his middle-American upbringing also fed his interest in photography.

“I think there’s something about growing up in the Midwest that gave me a populist angle on culture,” he said. “And so, for me, while I love all areas of art history, I think there is a special fit for me with photography, with its special democratic qualities.”

Photography’s democratic tendencies, which Kelsey dates to the days of the daguerreotype, have only intensified with the advent of ever-more-accessible technologies.

“When photography was invented, it was heralded as this great new democratic way of producing pictures,” he said, “but actually there have been subsequent revolutions that have democratized it even more radically, the ‘Kodak Moment’ being one, and our own digital moment being another.”

Despite these advances, Kelsey himself has a conflicted relationship with the practice of photography. He admits to suffering from what might be called “photographer’s block.”

“I feel burdened by knowing all that has been done, the brilliant things that have been done,” he said. “I am committed to becoming more serious about practice, but it will mean negotiating that past.”