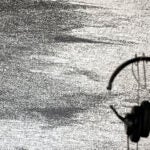 Historian Robin Fleming’s recent lecture at Harvard was on economic calamity in early medieval Britain, and how people in desperate straits turned to “recycling” Roman ruins for what they needed.

The Radcliffe Fellow, on leave from Boston College, used dozens of slides — of knights in helmets, stone churches, iron fixtures, and more. But one picture was contemporary: a Haitian man, hammer poised in midair, scavenging rebar from post-earthquake rubble.

Perhaps fifth century Britain, thrown into abject poverty by the withdrawal of Roman power, offers a lesson to the modern world. In some countries, after all, culture, industry, and governance are fragile too, and await the fall of some modern Rome.

Recycling can earn us a living, early Britain tells us. (The Haitian man agrees; he sold his rebar to Chinese scrap dealers.)

But the same dark century also says that sometimes recycling is not a way to make money; it is a way simply to survive. Its pervasiveness in a society can reveal a depth of impoverishment so profound that it signals a world devoid of money, factories, literacy, and political structure.

Without the “comforting similarity” of life that Rome brought, Fleming said, Britain’s nascent cities emptied out, London among them, and devolved into “highly mobilized, small-scale communities” forced to make do on their own.

She told an audience of 50 at the Radcliffe Gymnasium that, at around 400 A.D., Rome was beleaguered by wars elsewhere and began to withdraw its soldiers and administrators from remote Britain. The empire also stopped sending shiploads of precious metals to back up the local bronze currency.

Without “the unifying force” of the state, its culture, and its manufacturing prowess, said Fleming, Britain was plunged into centuries of economic travail. Within a generation, fifth century Britain — once “as Roman as any place on the planet,” she said — was without the production, supply, transportation, and money systems Rome had brought to its colony.

The result was a population “deskilled” for centuries and forced to rely on wholesale scavenging, said Fleming. With no money, no industry, and no legacy of craft, there was no one left to quarry stone, smelt metals, or make pottery. (For one thing, she said, Britain was “a-ceramic” for the next 600 years.)

But there was at least plenty to recycle. By the second decade of the fifth century, Roman-era towns, manufacturing sites, forts, villas, and temple complexes had fallen into ruins. People raided buildings for quarried stone, iron clamps, and hefty 2-pound nails. They stripped lead pipe from deftly engineered water systems. They robbed graves for pottery and cooking utensils.

But these scavengers also left behind a rich material record of what they stole, recovered, and reused. That’s another lesson from early Britain, this one for historians. The material record, often little valued by scholars, can be richer than the textual record, said Fleming.

Yet historians of early medieval Britain still cling to text as the preeminent way of shining light on the period. “Most of you think historians are in the past business, but we’re really in the text-interpretation business,” she said. “And we’re as attached to the written word as any professor of literature.”

Fleming, a one-time junior fellow in the Harvard University Society of Fellows, is using the year at Radcliffe to finish her third book, “Living and Dying in Early Medieval Britain.”

Text sources are important to her. Among other things, she is a scholar of the Domesday Book, the great survey of England’s lands completed in 1086 for William the Conqueror.

But material culture is also important, she said, in this case the “vast stores of Roman-period material” that Fleming said had piled into ruins after the collapse of Rome in Britain. Thousands of Roman sites became vast repositories for scavengers, who combed ruins for brick, tile, iron, lead, and — above all — quarried stone.

Until the 11th century, virtually all stone used to make early Christian churches was from Roman ruins, said Fleming. And as late as the 14th century — 900 years after the fall of Romanized Britain — masons were still using Roman brick and tile.

Architectural surveys of churches built from Roman materials show there were 300 in the London region alone. “Everywhere you look,” said Fleming of present-day British structures, “you see Roman material.”

And it was abundant. She used the example of a Roman bath in East Sussex. It was abandoned in the third century, hidden until the 19th under a slag heap, and finally excavated in the 1970s. The simple bath yielded up “a whole universe of brick and tile,” 13 tons of it, said Fleming.

So vast was the scale of material that salvage operations went on from the fourth to the 20th centuries. Roman engineers had used iron in buildings and walls: clamps, hinges, window grilles, gate pulls, and giant nails. The Coliseum in Rome, Fleming said, offering an example, contains an estimated 300 tons of iron clamps.

Most scrap metal was reforged. Most villages had lost the art of smelting — making metal from ore — but they still had smithies with hot fires. Metal tools that were still useful — agricultural tools, spoons, harnesses — were saved from the melting pots.

Roman pottery, scavenged from dump sites and ritual graves, was popular among medieval recyclers too. But in some communities, old pots were sometimes repurposed, sometimes broken just so their circular bottoms could be used as molds for large-scale brooches.

There’s a lesson here for historians, said Fleming. In the absence of reliable narratives about ancient lives, we can recover some of those lives, she said, “if we bother to look at material evidence they left behind.”