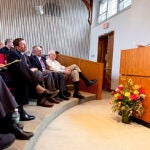 ‘Walden’ for the 21st century

Traveling by art to places real and imagined

During his freshman year at Harvard, Christian Starling ’10 had a panicky moment. An art project was due. What now?

He found the answer under his bed — in bits of trash, paper, and random materials. Voila, he had an art installation.

The experience also gave the anthropology concentrator a theme that has lasted four years. Starling began collecting found objects in Cambridge and Boston, and on sojourns to Mississippi and New Orleans. He recorded what he found and where (including an Old Thompson whiskey bottle, from in front of the Memorial Church, that was empty.)

For a new show of student art, “Invisible Cities,” Starling took images of three months of objects and arranged them chronologically in a tiny diary. The images and entries resonate with a strange power and read like a poem of consumer culture: belt buckle, hoop earring, Ph paper, hair piece, flattened fork, bent spoon, fragment of licorice rope, cell phone antenna. (Earth to civilization: Is that you?)

The strange power of cities, real and imagined, is the theme of “Invisible Cities,” where a visitor will find Starling’s “The Book of Found Objects,” along with the work of 14 other Harvard students. The show runs through April 20 at the Center for Government and International Studies, CGIS South, 1730 Cambridge St. It was co-curated by Nancy Lin ’11 and Anne Sawyier ’12, both history of art and architecture concentrators.

Included in the show at the building’s Concourse Gallery are photographs, paintings, drawings, miniature sculptures, and five films running in a continuous loop.

“Invisible Cities” is more about the emotional response to places than it is about travel itself, said Lin.

Fun was part of the equation too, and inclusion. “We wanted to reach out to as many students as possible,” said Sawyier. “We wanted the artists to have fun with it, and to share their internal experiences of places.”

The students represent a clash and clamor of disciplines: economics, biology, art, literature, and the social sciences. A budding economist, Jieliang Hao ’11 made her “White Series” from daily photo studies of the same corner of Dunster House.

“That’s not like a travel-abroad photo,” said Lin, who called the Hao series “her own poem,” and a kind of internal journey. “You don’t need to travel abroad to have journeys. You can have them inside of you.”

Kayla Escobedo ’12, a Visual and Environmental Studies (VES) concentrator, displayed a few panels from MONTY, a graphic novel in progress.

And neurobiology student Natasha Coleman ’10 co-created “Moving Through the City,” a mixed media/video exploration of New York, with Andrés Castro Samayoa ’10, a concentrator in Studies of Women, Gender, and Sexuality.

“Invisible Cities” — taken from the title of a 1972 novel by Italo Calvino — seems to say that art has a place in every academic discipline.

Anh-Thu Ngo, a second-year doctoral student in anthropology, is one of two Harvard graduate students in the show. She used her film “Shadow of Echoes” to explore the sensory experiences of place.

Ngo recently spent 10 weeks in her native Vietnam, in the city of Hue, employing what she called “the camera’s amble and resting gaze” to give the viewer a lush sense of place that words alone cannot create. “Childhood and motherland loom in these dreams,” wrote Ngo, in the film’s minimal and poetic text.

There are caged birds in an outdoor market, men lounging at a tree-shaded café, a gray bridge fluid with the traffic of motorbikes, ancient stone walls, a shaded walk, and a vendor crouching on a sidewalk. She holds up a single flower.

“With this medium I was able to explore more creative aspects of my time there,” said Ngo. Hue is known for its centuries of art as well as for the Vietnam War’s most horrific urban battle, in 1968.

Ngo said Harvard is prominent among universities breaking new ground in “sensory ethnography,” the name of a two-semester class she took last year.

“There’s a lot more evocative power through images and sound,” said Ngo of using film for ethnography. But despite its power, she added, incorporating film into scholarship “is really stretching the boundaries of the discipline.”

Funding for “Invisible Cities” came from Harvard’s Office for the Arts. Guidance came from painter Bettina Burch, the art board associate at CGIS, and from Ruth Lingford, VES professor of the practice of animation.

Helping too was Paula Soares, VES manager of academic programs. “We just threw the ball,” she said of the show’s origin last fall. “Nancy and Anne ran with it.”