From class to Cannes 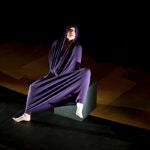 Of men, women, and space

“Shelley,” a film by Andrew Wesman ’10, has been chosen to screen next month at the prestigious Cannes Film Festival. Wesman, a Visual and Environmental Studies (VES) concentrator, is one of 13 filmmakers chosen from 1,600 entries submitted by film schools worldwide.

Judge Atom Egoyan will choose the best three films; the results will be announced on May 21.

But for an early viewing, “Shelley” will be shown next week at the Carpenter Center as part of the annual thesis and senior project film, video, and animation screenings. “Shelley” chronicles a 14-year-old who impulsively commits a horrific crime. When she and her boyfriend try to fathom what has occurred, she withdraws from reality.

For more information on the films and filmmakers.

The “VES Thesis Exhibition 2010: Index” will have its opening reception from 5:30 to 6:30 p.m. April 30 at the Carpenter Center in the Main Gallery on the first floor and Sert Gallery on the third floor. The works include a graphic novel, photographs, paintings, mixed media, video with installations, and a curatorial project.

This exhibition is free and open to the public, as are the film screenings associated with it. For further details, call 617.495.3251.