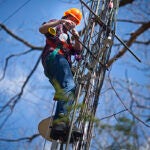 Battling climate change on all fronts

Panel examines what it will take to make a healthier planet

A man passionate about the Amazon rainforest, a woman committed to safeguarding the world’s water, and a Nobel Peace Prize winner were all part of a Harvard discussion Wednesday (April 14) about the future of the planet.

And much of what they outlined wasn’t good.

The environmental experts offered dire warnings and grim predictions about the Earth’s future, even as they offered glimmers of hope.

The scholars were part of the fourth and final panel celebrating the Harvard Extension School‘s 100th anniversary. It was titled “Sustaining Our Earth’s Ecosystems.” Steve Curwood ’69,  executive producer and host of the National Public Radio program “Living on Earth,” was the moderator. He asked the panelists what they saw as the greatest challenge facing the planet.

It’s man’s “disconnect with the environment,” said Eric Chivian, an assistant clinical professor of psychiatry at Harvard Medical School. People don’t realize that what they do has tremendous impact, both on the environment and their health, argued the founder and director of Harvard’s Center for Health and the Global Environment. In addition, because the loss of biodiversity happens so slowly, he noted, the problem is too “abstract” for many to comprehend.

Panelist Mark Plotkin was a high school dropout who was working moving dinosaur bones around Harvard’s Museum of Comparative Zoology when he became hooked on the Amazon and its issues after taking a class with former Harvard professor Richard Schultes. People need to understand that the Earth’s problems are all interconnected, he said.

Forest destruction is a main cause of climate change, said the Harvard Extension School graduate and authority on ecosystems, who went on to earn master’s and doctoral degrees and found the Amazon Conservation Team.

Plotkin, who has worked for years in the Amazon rain forest with indigenous peoples examining how their shamans use jungle plants for medicine, is also working with the same indigenous populations to help save the area’s forests.

Such conservation work is critical, he said, because the greatest threat to mankind is “drug-resistant bacteria.” If staphylococcus aureus swaps genes with streptococcus, “It’s going to melt the human race like a wax museum on fire,” said Plotkin. “Eighty percent of antibiotics still come from nature,” and the richest source of life is the Amazon.

People fail to understand how their actions directly impact the environment, echoed Alexandra Cousteau, granddaughter of famed undersea explorer Jacques-Yves Cousteau. “Our choices have far-reaching consequences to people on the other side of the globe. … [Forgetting that fact] is something that everybody is guilty of.”

The problem is endemic, said the water advocate, who described exploring with other environmentalists how overfishing had damaged a remote village, and then watching in horror as her colleagues ordered the very same endangered fish at lunch in a nearby restaurant.

There’s an “inability to understand the cycle that starts happening because of our choices,” said Cousteau, who noted that governments, industries, environmental organizations, communities, and indigenous groups all have roles to play in changing the dialogue.

The panelists also discussed how they became involved in their work.

Chivian, who won the Nobel Prize in 1985 for helping to develop International Physicians for the Prevention of Nuclear War, said his seminal moment came as a young physician. He recalled how a former professor helped to halt U.S. government’s plans for a fleet of supersonic transport planes by testifying that their nitrogen exhaust would harm the ozone and cause a rapid rise in malignant melanomas.

I realized that “ultimately environmental issues are issues of human health,” said Chivian, co-author of the 2008 book “Sustaining Life: How Human Health Depends on Biodiversity.”

Cousteau’s love of water came, unsurprisingly, from her grandfather, who took her on her first scuba dive at age 7. “I was hooked,” said Cousteau.

The environmentalist is planning a four-month trip across the United States this summer to explore the nation’s water issues. The work will be part of her nonprofit Blue Legacy project that advocates the conservation of the world’s water resources.

Ultimately, there is still hope for the planet, said the speakers.

Like in the past, as children learned in school about the dangers of smoking and became the most effective opponents when they took the warnings home to their smoker parents, working environmental education into school curricula will be an effective way forward, said Chivian.

Additionally, he said, big businesses understand there are savings involved in using more environmentally friendly practices, and money to be made in the business of renewable energy.

“There are big bucks in going green, and that’s a big, important development.”

Plotkin offered a further note of hope, saying, “These problems were all caused by people. They can be solved by people.”

The speakers’ comments were “gratifying, frightening, and inspiring,” Jack Spengler said near the conclusion of the two-hour talk at Lowell Lecture Hall. Spengler is the Akira Yamaguchi Professor of Environmental Health and Human Habitation at Harvard and director of the Extension School’s Graduate Program in Sustainability and Environmental Management.

The Harvard Extension School will sponsor one additional public event in celebration of its centennial. On May 14, Sherry Turkle of the Massachusetts Institute of Technology will deliver the Centennial Lowell Lecture titled “The Tethered Life: Technology Reshapes Intimacy and Solitude.” For more information.