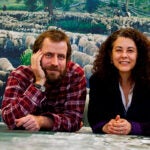 In 1942, Lidice, Czechoslovakia, was erased from the landscape.

German soldiers occupied the small village and executed the men by firing squad. Most of the women were sent to a concentration camp, most of their children to an extermination camp. The village’s buildings were burned to the ground. What was the rationale for this almost inconceivable crime against humanity? Retaliation for the killing of a high-ranking SS officer. German officials believed that those who assassinated him had ties to Lidice.

The horrific story of the condemned town is just one of many remembered in a new digital archive at the Andover-Harvard Theological Library at Harvard Divinity School (HDS), one that evokes the horror of the Holocaust and the courage and hope of a small group of organizations that united to provide succor to its few survivors.

“This collection tells stories that have never been told,” said Fran O’Donnell, the library’s curator of manuscripts and archives, who is managing the project. “One of the big stories it tells is of the many small organizations that worked together to help refugees from the Second World War.”

The newly digitized records include the contents of 260 boxes of documents and photographs from the library’s official archive of the Unitarian Universalist Service Committee (UUSC), a relief organization that distributed food, established orphanages and aid centers, and helped to relocate hundreds of European refugees displaced by the war.

“Up until now, these records were only available to those who could travel to Cambridge and work with them here,” said O’Donnell. “Now they are digitized; people can access them from the comfort of their own living rooms from anyplace in the world.”

For the past four years, several members of the library’s staff have organized and prepared the information for scanning, created digital specifications for the collection, and developed ways to make it easily findable online.

The collection includes correspondence from people looking for family and friends, as well as a host of images, many taken after the war, of the refugees who remained in the centers and homes established by the service organization. The records also include case files of the thousands of people whom the organizations helped relocate to the United States during and after the war.

The project began when the U.S. Holocaust Memorial Museum in Washington, D.C., contacted the Divinity School’s library in 2006, seeking access to its records of the Unitarian and Universalist service committees. (In 1963, the two organizations merged to become the Unitarian Universalist Service Committee.) The Holocaust Museum selected 29 collections for digitization.

Jointly funded by the museum and the Centre de Documentation Juive Contemporaine in Paris, the project’s newly digitized records help to put a human face on the events of the Holocaust.

“One hundred and six children in Lidice have been dragged away from their mothers,” reads one dispatch from a surviving resident of the town, who recounted her story to Martha Sharp, a social worker who, with her husband, the Rev. Waitstill Sharp, helped to form the USC. “Only a dozen of them have been found after an exhausting search. The Nazi terror continues to wreck the lives of those mothers who have survived the concentration camp; they will never know what became of their children, or if the child returned to them is really their own. The Germans were thorough in everything, in devising torture.”

In a handwritten letter yellowed by time and dated Aug. 28, 1945, a woman pleads for help in locating her missing husband. “The only information I have is that he was on a mission to Paris, France and that his plane … was damaged by enemy anti-aircraft fire while flying over the French Coast. … I have tried many ways to gain any information at all, but have had no luck so far.”

“You read about World War II in a history book, but to actually pick up a letter from someone who’s describing her own family — it just makes it seem so much more immediate,” said O’Donnell. “It brings the whole situation to life; the history is alive in these boxes.”

The collection is also a valuable research tool for scholars. The new book “Rescue & Flight: American Relief Workers Who Defied the Nazis,” by Susan Subak, includes many photos from the archive.

But while some records recount lost life and sorrow, they also offer rays of hope and comfort to those still seeking help.

Recently O’Donnell used the archive to provide a woman orphaned during the war with information about her birth mother. In addition to assisting World War II refugees, the Service Committee’s office in southern France helped many refugees from the Spanish Civil War in the late 1930s. The Spanish government has agreed to pay reparations to those who can prove they were victims of the conflict. Using the records, O’Donnell was able to help a man from Argentina prove that he was a child refugee from Spain who was relocated to a home established by the USC in France.

“If the records can touch some people, and give some people some closure about what happened to their family members and loved ones, I think that is a great service we can offer,” said O’Donnell, adding that the electronic records also capture the sense of collaboration among the many groups that were committed to helping those whose lives were turned upside down by the war.

“This archive shows that there were so many small organizations doing so much good,” she said, “in a very quiet kind of a way.”