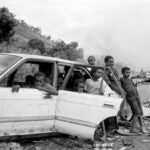 Jonathan Losos has made numerous trips to the Caribbean, and now Central and South America, to study the colorful, and oddly cute, anole lizard, a species in the genus Anolis.

Losos, an evolutionary biologist and the Monique and Philip Lehner Professor for the Study of Latin America and curator in herpetology at the Museum of Comparative Zoology (MCZ), has compiled decades of research into his new book, “Lizards in an Evolutionary Tree: Ecology and Adaptive Radiation of Anoles.”

It was Ernest E. Williams, the MCZ’s late curator of herpetology, who passed down his interest and regard for the lizard to Losos, then a Harvard undergraduate. Williams was a leader in the field — “the one who is really responsible for putting these lizards on the scientific map,” said Losos.

“Anoles are an extremely abundant group of lizards,” he explained, with about 400 species. “They’ve become a widely studied group to understand evolutionary diversity: How and why do some types of organisms become so diverse?”

A number of Harvard-trained biologists, whose interest was also jump-started by Williams, have been instrumental in advancing work on anoles by studying them intensely for the past 30 to 40 years. The amassed research spurred Losos to “write a book to synthesize this enormous literature” and to make it available to the biodiversity community.

“In any one place, these lizards have diversified greatly,” said Losos. “What’s remarkable, however, is that the independent evolutionary radiations on each of the larger islands in the Caribbean have produced pretty much the same set of habitat specialists. Convergence — the independent evolution of similar features by species occupying similar environments — is quite common, but convergence of entire communities is very rare.”

Now readying for a return trip to Central America for more research, Losos is gearing up for a possible new book. Scientists have recently sequenced the genome of one Anolis species, and Losos is excited about what’s to come.

But there was a time, Losos recalled, when he was intent on no longer studying anoles. That was after he graduated from Harvard, and the lizards were so popular among evolutionary biologists that, “I thought we had it all figured out.”