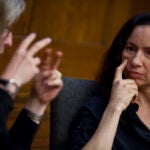 In a black-and-white photograph from 1959, a smiling Mao Zedong stands surrounded by a crowd of happy men in business suits. Art historian Claire Roberts, a Radcliffe Institute fellow this year, said the picture, titled “Chairman Mao Meets with VIPs from Asia, Africa, and Latin America,” was widely circulated at the time as celebrating being “liberated from oppression.” She pointed out that the photo was taken during China’s worst famine, believed to have killed between 15 million and 43 million people. “Photography is a medium that can mess with our eyes and mind,” she said. “It gives us the appearance of truth, and yet what we see in a photograph can never be the truth.”

Roberts gave a rapid tour of 150 years of Chinese photography during her March 24 lecture in the Radcliffe Gymnasium, with a focus on portrait photography of Chinese people. A research fellow at the Australian National University and senior curator of Asian arts and design at the Powerhouse Museum in Sydney, Roberts has conducted research for many years on Hedda Hammer Morrison, a German-born photographer who lived and worked in Beijing in the 1930s and ’40s and was the most important female photographer in pre-1949 China.

During her year at the Radcliffe Institute, Roberts and her Radcliffe research partners, Harvard undergraduates Sophia Wong Chesrow ’12 and Sharon Wang ’10, have studied Morrison’s photography in the Harvard-Yenching Library, which contains some 10,000 of her negatives. This work inspired Roberts to begin writing a history book.

There’s currently no historical overview of photography in China, even though photography became available there in the mid-19th century, said Judith Vichniac, associate dean of the Radcliffe Institute Fellowship Program, in her introduction of Roberts.

Many of the early Chinese photographers were commercial artists who learned their trade from visiting foreign travelers. Photographers adapted the new technology to the pictorial conventions of Chinese painters, creating, for example, lifelike portraits that were “better able to allow the spirit of a person’s expression to be transmitted into the future,” Roberts said.

The first pictures by Chinese photographers are believed to be self-portraits, in which the photographers perform for the camera. Zou Boqi (1819–1869), a scientist from Nanhai, southwest of Guangzhou, created the first Chinese camera, which dates from the period 1863 to 1866.

One of the early pictures that Roberts showed is by the photographer Afong, who opened a studio in Hong Kong in 1859. His commemorative photo of businessmen from Russell & Co., one of the earliest and most successful American companies trading in silk, tea, opium, and other goods, is in the collection of the Peabody Essex Museum in Salem, Mass.

By the late 1800s, Shanghai had become a center for photography, and remained so for many years. In the 1920s and ’30s, the city was known as the “Paris of the East,” producing popular magazines and newspapers that were richly illustrated with photographs.

After the Communist Party came to power in China in 1949, the line between news and art photography became blurred as the party used images for propaganda. Roberts said that during the Cultural Revolution, from 1966 to 1976, “codified ways of seeing continued in an even more heightened form.” She showed images from the Harvard-Yenching Library that were taken by professional photographers in northern China. “What is striking,” she said, “is their standardization: the formal poses, the prominence of revolutionary symbolism, and the serious expressions.”

A moment of transition occurred in 1976, when Chinese Premier Zhou Enlai died. An amateur photographer named Luo Xiaoyun recorded the thousands of people who gathered in Tiananmen Square on the traditional early April day to commemorate the dead, to mourn Zhou’s passing.  But the demonstration was seen as an act of defiance against the Gang of Four, a group of leftist Chinese Communist Party officials. “Regarded as subversive, the negative for this and many other images were hidden,” Roberts said. After Mao died and the Gang of Four fell from power, the April demonstration was “rehabilitated” as a positive event, and the photos by Luo Xiaoyun and others were published in a book designed to promote the new regime. “Photographs that were dissident reportage were co-opted as official images of commemoration,” said Roberts.

After the events of the late 1970s, many amateur photographers turned away from reportage and explored forms of photography that couldn’t be so easily co-opted by the state. An exhibition titled “Nature, Society, and Man,” held in Beijing in 1979, was organized by the April Photo Society, the name of which made a direct link with the events of April 1976.

Roberts concluded her survey with the work of a contemporary photographer, Liu Xiao Xian, who was born in Beijing and who has lived and worked in Sydney since 1990. She showed one of his photos, called “Home-London,” which shows a Chinese family posed in front of a painted backdrop of Tiananmen Square, obscuring a postcard view of Buckingham Palace with additions of guards on horseback and a blue sky, made in Photoshop. Roberts, who knows the photographer, said that the group in the photograph is Liu’s own extended family and that the photograph was taken in Tiananmen Square.

“With its travel snapshot guise and Photoshop-ed perfection,  ‘Home-London’ is a poignant contemporary portrait,” Roberts said, “and a playful comment on blurred boundaries between local and global, the past and the present, painting and photography, truth and reality.”