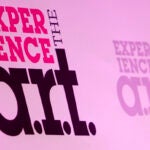 Andrea Fraser discusses her quintet of videos at Carpenter Center

In Andrea Fraser‘s provocative 2003 video “Untitled,” the performance artist films a sexual encounter with a private collector who paid tens of thousands of dollars to be part of her work.

“He said he wanted to participate in an artwork beyond writing a check,” Fraser told a Harvard crowd on Wednesday (March 24). “That became very meaningful to me, and something that I took very seriously.”

For the artist — who was well-established in the art world by the time she made the controversial video — the work became a metaphor for the selling of art as prostitution, where the artist becomes the prostitute. Rejecting the notion that she was exploited, Fraser said the piece was a reflection of a capitalist society where “all human relations get reduced to relations of economic exchange,” and represented those societal dynamics in a “very literal way, to an extreme, so as to hopefully encourage people to think about it and reflect on it.”

The public can reflect on some of Fraser’s other works that are now on view at the Carpenter Center for the Visual Arts at Harvard University. The current installation, “Andrea Fraser: Boxed Set,” consists of five video works made between 1989 and 2001. Each involves the concept of institutional critique, a cornerstone of Fraser’s performance work that casts a critical eye on art institutions such as galleries and museums, and frequently on the nature of art itself.

The works on display were originally produced for specific sites and situations. “Museum Highlights” and “Welcome to the Wadsworth,” two of the five, were live performance tours of the Philadelphia Museum of Art and the Wadsworth Atheneum in Hartford, Conn. Fraser explained that the performances in the “Boxed Set” built on her experience with appropriation art. But where she had previously borrowed images and texts for her artwork, in her live performances she instead appropriated “positions and functions within specific contexts and settings.”

In an attempt to define the public’s relationships to “institutions and how we experience them,” Fraser adopts the role of a docent in “Museum Highlights,” using inflated language to describe not only the building’s art but also mundane aspects such as its water fountain and men’s room.

Much of the work came out of what she described as a “fairly desperate psychological need to feel like I could pass.” A high school dropout, Fraser said she mimicked the language, posture, diction, and gestures of art critics and museum guides in her work in an effort to understand the “legitimate culture” of the art institutions that were foreign to her when she first moved to New York.

It “had everything to do with my very painful sense of illegitimacy in relationship to these institutions.”

Fraser’s work often elicits both laughter and tears, said Helen Molesworth, chief curator at the Institute of Contemporary Art in Boston, who took part in a discussion with the artist at the Barker Center. Molesworth, formerly the head of the Harvard Art Museum’s Department of Modern and Contemporary Art and its Maisie K. and James R. Houghton Curator of Contemporary Art, said she noted a Brechtian quality in the artist’s performance work, one that “balances on a knife edge” between humor and “deep psychological places of shame.”

Yet while Fraser’s work often falls into the category of institutional critique, a trend that emerged in the late 1960s as a type of artist-against-institution movement, the artist said her performance work, which began in that vein, has morphed into a “defense of the function of art.”

By staging her performances within those institutions, her work was a way of “defending” those sites as places of critique, culture, and critical self-reflection.

“Andrea Fraser: Boxed Set” will be on view at the Carpenter Center through April 4.

Marjorie Garber, William R. Kenan Jr. Professor of English and of Visual and Environmental Studies and director of Harvard’s Carpenter Center for the Visual Arts, also took part in the discussion. The talk was part of “The Church of What’s Happening Now: New Art, New Artists,” a series co-sponsored by the Harvard Art Museum and the Humanities Center at Harvard.

The next lecture in the series will take place April 28 in Room 202, Harvard Hall, at 6 p.m., featuring artist Allan Sekula in conversation with Harvard’s Homi Bhabha, Anne F. Rothenberg Professor of the Humanities and director of the Humanities Center, and Benjamin Buchloh, Andrew W. Mellon Professor of Modern Art. The event is free and open to the public but seating is limited. For more information