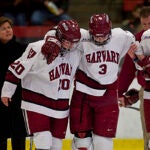 The Harvard Project on American Indian Economic Development, housed within the Malcolm Wiener Center for Social Policy at the Harvard Kennedy School (HKS), and its sister organization, the Native Nations Institute (NNI) at the University of Arizona were presented with the Public Sector Leadership Award by the National Congress of American Indians (NCAI) on March 1 in Washington, D.C.

NCAI, which is the national association of American Indian nation governments, recognized the programs for their “groundbreaking research and technical assistance in partnership with and for the benefit of Native nations.”

Co-founded in 1987 by Joe Kalt, the Ford Foundation Professor of International Political Economy at HKS, the Harvard Project is recognized for its pathbreaking research aimed at understanding and fostering the conditions under which sustained, self-determined social and economic development is achieved among American Indian nations.

The project was instrumental in the launching of NNI in 2001. Together, the two organizations provide research, advisory services, executive education, and policy analysis. The Harvard Project also administers an internationally acclaimed tribal governance awards program, Honoring Nations, which shines a bright light on achievement in local governance and fosters replication of successful programs and policies. At the heart of the work of the Harvard Project is the recognition that governance plays a critical role in providing the necessary scaffolding to sustain prosperous societies.