From book to cinema 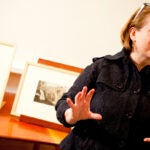 A strange thing began happening to Kimberly Theidon awhile back. She started receiving e-mails congratulating her for something. The only problem was that she had no idea what she’d done.

“I was trying to figure out: What did I do?” said Theidon, who is an associate professor of anthropology in the Faculty of Arts and Sciences. “Then I looked at the title of this film, and I realized: ‘Here is your book. There has been a film made about it.’”

It turns out that Theidon’s research was the inspiration for a Peruvian film, “The Milk of Sorrow,” or “La Tete Asustada” in Spanish, which had won the prestigious Golden Bear Award at the Berlin International Film Festival. It is now the first Peruvian film to be nominated for Best Foreign Language Film at the Academy Awards.

Her 2004 book “Entre Prójimos,” about women raped by soldiers during Peru’s recent civil war, served as a source for this narrative film.

In the 1980s, guerrilla militants tried to overthrow Peru’s national government. Amidst this upheaval, hundreds, perhaps thousands, of women endured rape at the hands of various armed actors, including members of the Peruvian armed forces — creating a legacy of violence that still resonates within the country. That legacy is the subject of Theidon’s book and is thematically addressed in the film.

Theidon, who has worked in Peru since 1995, lived in the Ayacucho region of the country, where she came to know the women who lived in these villages. As she conducted her research, she recorded their stories of violence inflicted by the soldiers. The women also talked about the aftermath of the rapes, including pregnancies.

“There were a number of women who talked about how they worried about their children being born during this time,” said Theidon. “They were concerned about the damage being done to their babies, either in utero or through their breast milk. They were concerned that somehow their children would be damaged as a result of their own sorrow and suffering.”

The film’s title refers to the belief that, after a traumatic event, mothers pass their sorrow to their children when nursing.

“The Milk of Sorrow” is a metaphorical narrative that expounds on that theme. The central character is a young woman named Fausta. Before Fausta was born, her mother was raped during the conflict, and her father was murdered. The story begins as Fausta’s mother is dying, and she sings to her daughter about the horrors she faced many years ago during the war.

Fausta suffers because of la teta asustada, and she fears that she too will meet her mother’s fate. The film uses magical realism to underscore this point, which is a common style in Latin American literature. As the film progresses, Fausta begins to come to terms with the violence her mother experienced, and how she has been affected.

Directed by Claudia Llosa, who is also a young Peruvian woman, “The Milk of Sorrow” is the most critically acclaimed and internationally recognized Peruvian film ever. The attention to the film has provided an opportunity for discussion of sexual violence, which is a difficult topic to address in Peru, as it is in many countries.

“I think that the film opens up a space for dialogue,” said Theidon. “Films are going to reach a broader audience than most books. And I think that is something that is particularly gratifying about the film.”

Theidon says she never imagined that her work would inspire an artist in this way, but she did write a book that she hoped would be readable, accessible, and compelling to a variety of audiences. She wrote a book, she says, that invites readers to want to know more — whether or not they can find Peru on a map.

“You put your work out there in the world, and you never know if anyone reads it,” said Theidon. “And when they do, and it leads to something like this, it’s fabulous.”