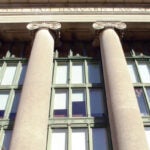 E.O. Wilson, the Pellegrino University Professor Emeritus at Harvard, has been awarded the Thomas Jefferson Foundation Medal in Architecture, the highest external honor given by the University of Virginia.

Best known for developing and popularizing the fields of sociobiology and biodiversity, Wilson has promoted the concept of “biophilia,” which suggests that, as humans co-evolved over millennia with nature, they needed direct contact with nature to thrive. This concept creates a challenge for designers and planners to look for effective ways to integrate green features and elements into buildings and neighborhoods of the future.

Wilson is the author of more than 20 books, many of which have received national and international recognition. He has two Pulitzer Prizes for general nonfiction, one in 1979 for “On Human Nature” and the other in 1991, which he co-authored with Bert Holldobler, titled “The Ants.” In the study of ant behavior discussed in the latter work, Wilson argues for a sociobiological explanation for all social behavior on the model of the behavior of social insects.

To read more, visit the University of Virginia Web site.