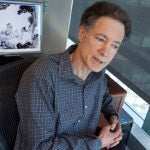 Alzheimer’s for humans only

Humans are only animals to get the neurodegenerative disease

Of the millions of animals on Earth, including the relative
handful that are considered the most intelligent — including apes, whales,
crows, and owls — only humans experience the severe age-related decline in
mental abilities marked by Alzheimer’s
disease.

To Bruce
Yankner, professor of pathology and neurology at Harvard Medical School (HMS),
it’s pretty clear that evolution is to blame.

“Something has occurred in evolution that makes our brain
susceptible to age-related change,” Yankner said in a talk last night
sponsored by the Harvard
Museum of Natural History as part of its “Evolution
Matters” lecture series.

Yankner, whose HMS lab studies brain aging and how getting
old gives rise to the pathology of Alzheimer’s and Parkinson’s diseases, said Alzheimer’s is
one of the most rapidly emerging diseases of this century. As medical science
lengthens human lifespan, the proportion of the population that is elderly is
growing. Considering that as many as half of those over age 85 develop
Alzheimer’s, there is a growing urgency to understand the disease more fully
and to develop more effective interventions.

“It is clear that cognitive impairment and decline is one of
the emerging health threats of the 21st century,” Yankner said.

Yankner said that scientific evidence shows that some
cognitive decline — beginning in middle age and accelerating after age 70 — is
normal as we grow older. This decline is also seen in other animals, including
mice and monkeys. It is marked by wide variation among individuals, with some
individuals maintaining cognitive abilities similar to those much younger.

The puzzling question, Yankner said, is why humans develop
the severe disabilities of Alzheimer’s disease. Studies of other creatures show
no sign of similar conditions even in our closest animal relatives. That means
susceptibility to Alzheimer’s evolved recently, likely during a period marked
by a rapid increase in our brain size. Size alone probably isn’t the
determining factor, though, Yankner said, since other animals are known to have
even larger brains, including whales, elephants, and even our extinct relative
the Neanderthal.

Instead, he said, it is likely that brain complexity and the
new large number of cells in the human brain have something to do with it.

Recent research, in Yankner’s lab and elsewhere, has used
genetic tools to probe the differences between young and old brains in humans,
monkeys, and mice. The work shows that gene function in the aging brain slows —
dramatically in ones with Alzheimer’s — and that the genes that shut off the
most are those that protect the brain against genetic damage from environmental
and other factors.

Yankner said he believes that cognitive decline is due to a
slow accumulation of genetic damage in the aging brain, with Alzheimer’s
showing the most severe form of this damage, called double strand breaks.
Though the source of the damage is not yet clear, one culprit, he said, may be
the accumulation of metals in the brain over time, particularly iron.

Neurons use more energy than most other cells, Yankner said.
With the brain’s increase in complexity over time, its energy demands also
rose. Iron plays a key role in a cell’s energy-producing mitochondria, and so
iron accumulation leading to genetic damage could be a byproduct of our
neuron-rich, energy-gobbling brains.

“Aging is a balance between wear and tear and repair. Where
you wind up in that balance determines how you do,” Yankner said.