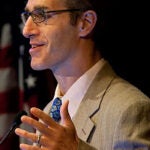 If a middle-aged or older
woman with a normal body mass index wants to maintain her weight over an
extended period, she must engage in the equivalent of 60 minutes per day of
physical activity at a moderate intensity, according to new findings by Harvard researchers at Brigham and Women’s Hospital (BWH).

“There is plenty of research on treating overweight and obesity — that is,
looking at strategies for weight loss among overweight or obese persons, but
very little research on preventing weight gain in the first place. Most
overweight and obese persons who lose weight do not successfully maintain their
weight loss over time, and so, from a public health perspective, preventing
that initial weight gain is important,” said I-Min Lee, an associate
professor of epidemiology
at Harvard School of Public Health (HSPH), epidemiologist in the Division of Preventive Medicine at BWH, and associate professor
of medicine at Harvard Medical School.

The findings are published in
the latest issue of the Journal of the American Medical Association.

Lee and colleagues analyzed data reported from more than 34,000 healthy U.S.
women in the Women’s Health Study over 13 years to examine the relationship
between the level of daily physical activity and weight change over time. Women
in the study reported their leisure-time physical activities every two to three
years. Each time that physical activity was assessed, women were divided into
three groups, according to the amount of time they spent engaged in physical
activity.

Over the duration of the 13-year study, the average weight of participants
increased by 6 pounds, which is a rate of weight gain similar to that of
comparably aged women in the general population. Compared with the most active
women, both the group physically active for 150 to less than 420 minutes a week,
and the group physically active for less than 150 minutes a week gained
significantly more weight than the most active group. The two less-active
groups also were significantly more likely to gain at least 5 pounds, compared
with the most-active group.

Researchers discovered that the findings differed significantly, according to
women’s body mass index (BMI). Physical activity was associated with less
weight gain only among women with a
normal BMI, which is less than 25. An average U.S. woman who is 5 feet, 5
inches tall must weigh less than 150 pounds to have a normal BMI. Among heavier
women, physical activity — at least, within the levels that study participants
undertook — was not related to less weight gain.

In this study, researchers were able to identify a group of “successful weight
maintainers.” These were women who started with a normal BMI and managed to
maintain their weight, gaining less than 5 pounds at each weight assessment,
throughout the study. These women, 13 percent of participants, consistently
engaged in physical activity that was the equivalent of 60 minutes a day of
moderate-intensity physical activity.

“These findings shouldn’t obscure the fact that for
health, any physical activity is good, and more is better,” Lee emphasizes. “It
is important to remember that weight is only one aspect of health. Many studies
have shown that being physically active for even 30 minutes a day, five days a
week, significantly reduces the risk of developing many chronic diseases, such
as cardiovascular disease, some cancers, and type 2 diabetes.”

This study was funded by the National Institutes of Health.