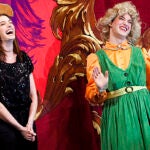 Harvard’s men’s hockey team will have to wait another year for a shot at its 11th Beanpot Championship.

Overwhelmed and overpowered by No. 14-ranked Boston College (B.C.), the Crimson were throttled, 6-0, in their worst Beanpot loss ever on Monday (Feb. 1).

The severity of the loss came as a surprise given Harvard’s recent run. Even though the Crimson had entered Monday’s matchup with a 5-11-3 record, they had a 3-1-1 record in the past five games, including a 3-2 victory over No. 5 Yale (Jan. 12) and a 4-1 blowout on the road against No. 13 Union.

After yielding the first goal less than six minutes into the game, Harvard tightened up on defense, holding off the Eagles at bay for the rest of the period.

“They were clearly the better team tonight. They beat us to all the loose pucks, and they used their speed to force us into taking penalties,” said Crimson head coach Ted Donato. “I don’t think we gave ourselves a chance to win.”

“This is obviously a great disappointment to our team,” Crimson captain Alex Biega ’10 said of the loss, “especially on such a great national stage.”

The excessive physical play of the Crimson may be the biggest reason for their struggles, since they drew a season-high 17 penalties, for a total of 58 minutes in the penalty box.

Harvard, which lost a 4-3 nail-biter to B.C. earlier this season (Dec. 6), has now dropped six straight to the Eagles.

“They were solid. We had a couple of runs that might have given us a chance to get back into the game, but give Boston College a lot of credit,” Donato added. “We were never able to get into what we were trying to do, and their speed and skill had a large role in that.”

The Crimson will have to regroup quickly, with two Ivy League road contests this weekend against Brown (Feb. 5) and Yale (Feb. 6), before heading back to the TD Banknorth Garden for the Beanpot Consolation game next Monday (Feb. 8) at 5 p.m. against Northeastern. The last time the two teams met in the Beanpot was in 2008, when  Harvard defeated the Huskies, 3-1, to skate into the title game.

“We’ve certainly built some positive momentum over the last month,” said Donato. “This is a tough pill to swallow, but I think we’re trying to get back to a point where we come into a Beanpot with a real strong record and have a chance to win.”

“I think, for the most part, we’ll get better as time goes on,” said Biega. “We just have to keep working and stick together. We win and lose as a team.”