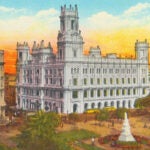 Havana, then and now

If you think Harvard is an animated place, you don’t know the half of it.

Though it is not widely known, the University famous for literature, languages, and medicine also helped to pioneer the art of making still images appear to move.

Sand animation got its start at Harvard (though artists in Switzerland were on the same sand-shifting track). And stop-motion clay animation — an art that has reached a zany zenith with the “Wallace and Gromit” films — had part of its start in Cambridge.

Manipulating sand and clay to simulate motion were among the fruits of an animation program begun at the Carpenter Center in 1963. That was the year when Robert Gardner, a documentary filmmaker and longtime director of Harvard’s Film Study Center, hired animators John and Faith Hubley to teach.

“I get bored of people saying: ‘I didn’t know there was animation at Harvard,’” said exhibit organizer Ruth Lingford. “And actually there’s this fantastic history.“

Lingford, professor of the practice of animation in the Visual and Environmental Studies (VES) program, organized “Frame by Frame: Animated at Harvard.” The show of new and old work is in the Carpenter Center’s Sert Gallery through Sunday (Feb. 14).

The show runs on seven screens and in two looping wall projections. It includes early work by sand animator Caroline Leaf  ’68 (the magical “Sand, or Peter and the Wolf” from 1969) and Eli Noyes ’64 (whose “Clay, or the Origin of Species” drew an Oscar nomination for best animated short).

Viewers get the long and short of animation, from the 18-second “Orgasm Loop” by Terah Maher, M.Arch ’06, to the epic (in animation terms) “Asparagus” by Suzan Pitt, a lavish 1979 production now considered a feminist classic. In the exhibit notes, Pitt wrote that she made a film that “flowed slowly forward like a daydream.”

But even daydreams take time to create on screen. Animators old and new admit to the art’s time intensity, saying it is “insanely labor intensive,” as Lingford put it.

For one scene in “Asparagus,” in which a woman watches a garden pass by as if it were a movie, Pitt recalled a 48-hour shoot at the Carpenter Center, “where I never slept or left the camera room.”

Animation’s time sink cost the 1997 movie “Titanic” a summer release — six extra months because of production bottlenecks. In those days, a single frame required a rendering time of 72 hours. (For today’s “Avatar,” whose credits include almost 1,000 animators, rendering time is now down to 24 hours per frame.)

Maher, an animation teaching assistant at VES who designed the “Frame by Frame” exhibit, said it took her six months to create her 18-second animation loop, though she was not working full time on it.

“It’s not just cartoons,” said Maher, who fell in love with the art form while studying architecture. “Animation is much more.”

For one thing, it is an art form that takes advantage of optical illusion. Still objects that vary slightly, when separated by a slight interval of darkness, appear to move.

In her exhibit notes, Lingford called animation “freedom from restraints of the possible.” And Leaf, visiting the exhibit at a Feb. 4 reception, recalled that at Harvard in the 1960s animation was taught like “another creative art, like poetry or writing.”

Charlestown animation designer and teacher Pell Osborn, founder of LineStorm.com, was a special student at the Carpenter Center in 1974-75, years that shifted his career path from French literature and playwriting to creating motion with still objects, drawings, or paintings.

He chatted with Leaf at the reception. Both recalled how the Carpenter Center shimmered with creative energy. “The animation felt free,” said Leaf, now a London-based animation artist trying to break into oil painting. “Nobody was checking up on that.”

Working at the 16mm Moviola editing machine was absorbing, Osborn said, but “you just felt this swirl of energy behind you,” as other animators worked with sand, puppets, and clay.

Harvard’s old Moviola editing machine is on display at the exhibit. It’s a steel contraption the size of a Franklin stove with switches, buttons, pedals, and “exciter lamps” that evoke Jules Verne more than James Cameron. There are puppets too — doll-size models of plaster gauze and armature wire — from a work in progress called “Shapeshifter” by Lillian Fang ’10.

She is co-teaching a course this semester on animation for the sciences, along with two Harvard cell biologists. A similar course is under way at Harvard Medical School.

Perhaps two or three VES students a year produce animation projects for their senior theses, she said. But many more use the art to supplement their scholarship, including students in biology and chemistry.

“It’s quite a young art,” said Lingford of animation. “We’ve only scratched the surface of possibilities.”