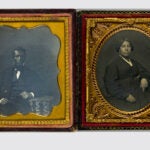 If you look at Amy Stein’s photographs of interactions between people and animals long enough, you begin to wonder which subjects are truly wild.

In Stein’s photos, taken in the small Pennsylvania town of Matamoras and on display in a new exhibit at the Harvard Museum of Natural History (HMNH), nature comes right up to the door, sometimes literally, in the form of coyotes, bears, and deer. But the efforts to shoo nature away, fence it out, and keep it at bay that are illustrated in the photos raise the question of where the wildness really exists, out there or inside us.

Of course, that’s the artist’s point.

Stein, a New York photographer, created the images in her “Domesticated” series — a selection of which are on display at the HMNH until April — while in graduate school at New York’s School of Visual Arts. The project grew from her fascination with hunting and taxidermy. Stein eventually moved out of the taxidermist shop and into the yards and homes of people whose run-ins with local wildlife were not only regular, but the stuff of newspaper articles.

The photographs are staged by Stein yet illustrate those real-life encounters. Using mainly stuffed animals in lifelike poses borrowed from the local taxidermist, Stein re-enacted the newspaper encounters, often using the original people involved. The stories themselves are the mundane stuff of rural and suburban life, with coyotes knocking over trashcans, a bird flying into a window, a girl watching a coyote beyond the backyard fence. Stein’s take on them, though, illuminates the intersection of man and animal, illustrating not just how close nature is, but also our response to it, and illustrating how wildlife is changed by us and our structures.

Elisabeth Werby, executive director of the museum, said the exhibit — which marks the first time Stein’s photos have been shown in such a venue — is the latest at the museum highlighting the work of photographers whose images examine the natural world.

“This exhibition continues the HMNH’s history of presenting work from recognized photographers that offers unique and unexpected perspectives on natural history,” Werby said. “Amy Stein’s photographs are provocative in the best sense, raising important and complicated issues about the boundaries between the built and natural environment and about our relationships with the wildlife around us.”

Stein, who was on campus Friday (Jan. 22) talking about her work, said virtually every resident of Matamoras, which abuts a state park, had a story of an animal encounter. One striking image of a young girl standing by her family’s pool looking at a black bear was inspired by episodes of bears swimming in the pool until the family erected a fence around it to keep them out.

Stein said people in the town, which backs up to a forested mountain, have a complex relationship with nature, one that is mirrored in many towns across the country. They appreciate nature, but also want to distance themselves from it.

“People were wonderful. They opened up their back yards to me, their homes,” Stein said.