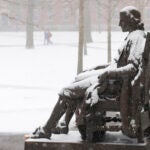 She’s played a princess, a dowdy journalist turned Vogue fashionista, and a secret agent. She’s been nominated for an Academy Award, a Golden Globe, and a Screen Actors Guild Award, but today (Jan. 28) Brooklyn-born actress Anne Hathaway won acclaim of another caliber: the Hasty Pudding‘s highest honor, and with it a Pudding Pot.

But all good things must wait, and before Woman of the Year Hathaway, 27, could gain her prize, she took a stroll through a brisk Harvard Yard on a tour led by Lucy Baird ’10. Looking ravishing in a patriotic crimson coat, Hathaway remained spirited even as snow began to fall, and she was without a hat.

Awed by Widener Library’s grandiosity, Hathaway sought a more in-depth look, charging the towering stairs and taking a peek around inside.

Later that afternoon, the actress, fresh from a snowy parade of Harvard Square with the Hasty crew, donned sequins and serious heels for her roast inside the New College Theatre, where she endured the incessant teasing of hosts Clifford Murray ’10 and Derek Mueller ’10.

Poking fun at her turns in the film “The Princess Diaries” and its sequel, “The Princess Diaries 2: Royal Engagement,” Murray and Mueller called her “the second most famous Anne to keep a diary.” Hathaway never once lost composure, however, coolly shooting back, “Love that Anne Frank line.”

Not even “Princess Diaries” co-star Julie Andrews could faze her. “What are a few of your favorite things?” sang an ersatz Andrews, played by Walter Klyce ’10.

“A few of my favorite things, besides Harvard … ” Hathaway replied, before launching into song with, “Raindrops on roses and whiskers on kittens …”

“Yes, that would be the correct answer for me,” Klyce shot back. “But I think you meant to say, ‘Appearing topless in movies.’”

The actress will soon appear as the White Queen in Tim Burton’s rendition of “Alice in Wonderland.” She famously starred in “Brokeback Mountain,” “Bride Wars,” “Get Smart,” and “Rachel Getting Married,” which earned her the Oscar nomination. She’s slated to star in “Get Happy,” a biography on Judy Garland, whom Hathaway resembles not only in looks — she can sing, too.

Ordered to croon by an apparition of the one, the only, Liza Minnelli, 1973’s Woman of the Year, Hathaway beautifully trilled about her skills to the tune of “Over the Rainbow,” a feat which finally persuaded Murray and Mueller to declare her worthy of the golden Pudding Pot.

“I get a little overeager and excited about things,” explained Hathaway, who didn’t trust herself enough to wing an acceptance speech.

So she read a poem she’d penned herself.

“I feel warm and gooey inside,” read Hathaway, “joyous with my reddened backside, that your roast smacked upside. My rump is swollen with pride.”

Hathaway’s Man of the Year counterpart Justin Timberlake will be at Harvard on Feb. 5. For more on the Man and Woman of the Year, or Hasty Pudding’s production “Commie Dearest.”

Woman of the Year Gallery