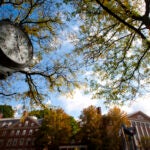 A first for Harvard

The Hasty Pudding Theatricals of Harvard University has chosen actress Anne Hathaway as the 2010 Woman of the Year.

Award festivities will be held Jan. 28 at 2:30 p.m. when Hathaway will lead a parade through the streets of Cambridge. Afterward, the president of the theatricals, Clifford Murray ’10, and the vice president of the cast, Derek Mueller ’10, will roast the actress and present her with her Pudding Pot at 3:15 p.m. at the New College Theatre, the Hasty Pudding’s historic home in the heart of Harvard Square since 1889. After the roast, several numbers from the Hasty Pudding Theatrical’s 162nd production, “Commie Dearest,” will be previewed at about 3:40 p.m., followed by a press conference at about 4:10 p.m.

The Man of the Year event will take place on Feb. 5.  The recipient of this year’s award will be announced next week.

For more information about the events, please contact the Hasty Pudding Theatricals’ press manager, D.J. Smolinsky ’11. He can be reached at 516.729.7858 or by e-mail at press@hastypudding.org.

The awards are presented annually to performers who have made a “lasting and impressive contribution to the world of entertainment.”  Established in 1951, the Woman of the Year award has been granted to many notable entertainers, including Meryl Streep, Katharine Hepburn, Julia Roberts, Jodie Foster, Elizabeth Taylor, and, most recently, Renée Zellweger. The Man of the Year award was established in 1963. Its past recipients include Clint Eastwood, Tom Cruise, Robert De Niro, Steven Spielberg, Harrison Ford, Anthony Hopkins, Bruce Willis, and, last year, James Franco.

Continuing to emerge as one of Hollywood’s most engaging talents, Hathaway shot to stardom in films such as “The Devil Wears Prada.” She went on to receive nominations for an Academy Award and a Golden Globe for her performance in Jonathan Demme’s recently acclaimed “Rachel Getting Married,” for which she was named best actress by the National Board of Review.

Hathaway has impressed audiences with her range as an actress, from her lauded dramatic performances in “Becoming Jane,” “Passengers,” and “Brokeback Mountain,” to her comedic turns in such films as “Get Smart,” “The Princess Diaries,” and “Ella Enchanted.” Hathaway also took to the New York stage last summer in Shakespeare in the Park’s production of  “Twelfth Night,” playing Viola.

Hathaway will next star in the ensemble romantic comedy “Valentine’s Day,” to be released in February, and as the White Queen alongside Johnny Depp in Tim Burton’s “Alice in Wonderland,” hitting theaters in March.

Director Garry Marshall has said of her, “The multi-talented Hathaway is a combination of Julia Roberts, Audrey Hepburn, and Judy Garland.”

To purchase tickets to “Commie Dearest,” contact the New College box office at 617.495.5205. The show opens Feb. 5 at the Man of the Year ceremony and continues in Cambridge until March 7. Performances are each Wednesday through Friday at 8 p.m., Saturday at 4 and 8 p.m., and Sunday matinees at 3 p.m.  The company then will travel to New York to perform at Hunter College’s Kaye Playhouse on March 12 and 13 at 8 p.m.  The tour continues to the Hamilton City Hall in Bermuda for performances on March 18 to 20 at 8 p.m.