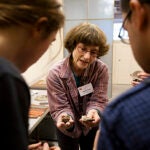 Theater adapts the Bard of Avon with modern mashups

Let’s imagine that one day in December 1609, playwright William Shakespeare wakes up and sees a time machine next to his bed. Curious about the future and always eager for more education, he sets the dials to “400 years ahead” and “Cambridge.”

There’s a flash of light, a puff of smoke, and — oops, wrong Cambridge. Shakespeare emerges on the afternoon of Dec. 5, 2009, near Harvard Square, and walks into the first theater he sees. On the bill at the Loeb Main Stage is a matinee presentation of “Best of Both Worlds,” a rhythm-and-blues and gospel send-up of his “The Winter’s Tale.” He watches the show and, zounds, he likes it.

Had the Bard of Avon arrived a few hours earlier, he could have heard a discussion called “Shakespeare Exploded,” part of a semester-long festival of plays, readings, panels, and outdoor performances by the American Repertory Theater (A.R.T.). The concept, conceived by the A.R.T.’s new artistic director, Diane Paulus ’88, is to show how Shakespeare’s work can be performed in modern times.

What would Shakespeare think of the myriad ways that his work is staged now?

He would be fine with that, suggested Paulus. For one thing, Shakespeare, whom she called a “theater animal,” embraced in his own time what is still a key mission of the theater: to bring in audiences.

Paulus likes the idea of reclaiming theater’s place as it was in Shakespeare’s time, “when it was more central and vital,” she said during the panel discussion. Theater then was a civic congregation that mixed the classes, celebrated language, and ritualized social life.

“We’re in show business. Shakespeare was in show business,” summed up panelist Oskar Eustis, who sees a similar audience-driven connection as bridging the ages. Eustis is artistic director of New York’s Public Theater, which among other programs brings Shakespeare plays to New York City’s parks in summer.

The bard’s plays contained characters for everyone: Bottom for the groundlings, Macbeth for the university-educated, and Lear for the royals. Diverse audiences helped to transform the playwright, said Eustis, and “forced Shakespeare’s talent to expand and fully flower.”

At the heart of “Shakespeare Exploded” are three main renderings of his plays made modern, all on stage through early January.

“The Donkey Show,” directed by Paulus, is a reimagining of “A Midsummer Night’s Dream” in a 1970s disco. Groundlings — most of the audience stays standing — are invited to dance as the show weaves around them. There are love potions, glittering and half-naked wood fairies, chaotic romance, and a looming Puck (on skates).

Then and now, said Paulus, whether in an enchanted wood or a magical nightclub, the experience “creates space for freedom of expression.”

“Sleep No More” is “Macbeth” made modern as a kind of Alfred Hitchcock thriller. It is a multi-sensory theater experience set in an abandoned school in Brookline, Mass., and was performed first by the London-based Punchdrunk company in its North American debut. Guests in masks wander through 44 rooms, including one full of pine trees and another lined with hospital beds. Watch out for the witches in the basement. They are toil and trouble.

“Best of Both Worlds,” co-written and directed by Paulus, brings “The Winter’s Tale” — with its jealousy, death, and redemption — forward into an all-black world. Joining in at the end of each performance are rocking, robed choruses from Boston-area church, university, and gospel choirs.

Earlier this year, the A.R.T.’s second-year students in graduate training put on a streamlined version on the Loeb Main Stage. The production also toured area schools.

“Shakespeare Exploded” owes its origins to a conversation that Paulus had more than a year ago with Harvard Shakespeare scholar Marjorie Garber, author of, among other books, “Shakespeare and Modern Culture” (2008). Garber is William R. Kenan Jr. Professor of English and of Visual and Environmental Studies, as well as director of the Carpenter Center.

The conversation led to the idea of a festival of modern Shakespeare, and a new course. Paulus and Garber taught “Theater, Dream, Shakespeare” this semester, the first collaboration of its kind between the A.R.T. and the Faculty of Arts and Sciences. (The course was also offered online through the Harvard Extension School.)

The course reflects another Paulus mission, to make the A.R.T. — its productions, actors, directors, dancers, singers, technicians — penetrate more fully into the intellectual and pedagogical life of Harvard.

What do the three main plays have in common? asked Garber during the panel discussion. “These are all dream plays,” she said, the artful consequence of a human desire across the ages to “wish and hope and pray.”

All of the plays bring to life “the power of the theatrical,” she said. This visceral sense of the emotional and intellectual power of the arts is what she and Paulus hope will draw the next generation of theatergoers and patrons of the arts. Emphasizing the importance of the humanities, Garber said, “You cannot start too young, and you never end.”

Eustis, who will dispatch mobile theater companies next year to all of New York City’s boroughs, agreed on the need for outreach and audience expansion. To that end, he said, “The most important thing you can do is make theater people want to see.” (The three A.R.T. Shakespeare productions have come close to selling out, and repeat customers are common.)

These modern explorations of Shakespeare are more than “adaptations,” said Garber. That is a word she dislikes because it implies his plays are set in stone. But in reality, she said, his plays are different every time they are staged, and are “artistic in their own right.”

During the course, Paulus and Garber experimented with other new notions, including remixes, sampling, and mashups.

Call the modern Shakespeare what you want, said Eustis, but be sure to “reach the people, and build a bridge to the deepest art form.”

In the end, theater still does what it did in Shakespeare’s time and before, he said. “We are in the business of telling stories — lies — to strangers in the dark.”