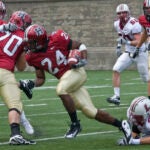 Forward Emma Markley ’11 of the Harvard women’s basketball team, who averaged 17 points and 12.5 rebounds in the Crimson’s victories over Holy Cross (Dec. 2) and Boston University (Dec. 6), was named player of the week on Dec. 7 by the Ivy League.

Averaging 16 points per game and 6.7 rebounds per game, Markley scored 18 points, pulled down a career-high 15 rebounds, and added two blocks and two steals in the 85-68 win over Holy Cross. She followed that performance with a 16-point, 10-rebound effort against the Terriers to guide the Crimson to an 85-68 victory over the Terriers.

Markley — who owns three out of the four Ivy Player of the Week honors this season — has won the weekly award six times in her career.