How the West was written 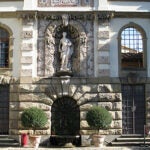 Where the Renaissance still lives

Teaching poetry at an all-boys school was more drama than actor Robin Williams asked for in “Dead Poets Society.” But that was a film, and in real life poet Katie Peterson probably wouldn’t mind a little on-campus action.

The Radcliffe Fellow, who teaches at Deep Springs College, an all-male experimental school and working cattle ranch in rural California, writes poems about the abject desolation of the American West, and notes that the nearest cross street in her town houses neither a grocery nor drugstore, but a whorehouse.

But Peterson’s life wasn’t always an airbrushed Mojave landscape. She earned a Ph.D. in English and American literature and language at Harvard in 2006, receiving the Howard Mumford Jones Prize for her dissertation, “Supposed Person: Emily Dickinson and the Selflessness of Poetry.” Her first book of poems, “This One Tree,” was published by New Issues Press (after winning a contest there). She has returned to Cambridge to revise and finish her next collection, “Strange Litany,” which chronicles road trips taken through dusty, remote locales, tracing — what one imagines to be — endless blacktop highways, discovering the uncanny nether landscapes of the soul.

“I never meant to write poems about the desert,” said Peterson at a Radcliffe Gymnasium reading on Wednesday (Dec. 16). While there, Peterson said, she “spent just as much time with others as I was alone, but the experience was solitary.”

Against a changing slideshow backdrop, Peterson revealed her home on the range: the dirt, the cows, a sun-bleached skull, and the towering cinematic mountains that quarantine her tiny Inyo County valley community from what lies just beyond.

“The valley is the size of Manhattan,” said Peterson, a photograph flashing behind her. “Now you’re trying to fit Manhattan into this picture, aren’t you?” she asked the audience.

Like those desert Westerns where heat and thirst lead people to hallucinate, Peterson’s poems are mirages, oases flickering within arm’s reach but vanishing upon any attempt to touch. That is to say they’re of a certain magic, contrasting the unfeeling and Spartan landscape with larger concerns of being.

“I was lonely so much, I began to understand loneliness not as an emotional state,” she said, “but as an orientation towards experience, capable of holding more than one emotional state.”

Peterson’s poems are not easy. Using Cormac McCarthy’s sparse novel “No Country for Old Men,” Peterson read a conversation between two men about traveling to California, identifying with the way McCarthy “calls landscape into being while never, or rarely, describing it.” She said the subject of the men’s conversation isn’t about the West, but “the way a place should feel in the West: originless, inexplicable … This is as close to a sense of place as I think I get. Place has something that annihilates the journey.”

Peterson channels a supernatural want ad in “Strange Litany,” a work that conjures the isolation of the desert, without overtly rooting it there:

Shame of the body

and of the sun

and of the spirit

on the white fencepost

In “The Truth Is Concrete,” she writes:

November wind. The feeling of knowing
something before you said it, all over everything.
As in, shadow take me into the side of the mountain,
As in, open up the earth and get inside
Leaving doesn’t mean much. Arriving
means everything, how you came to be where you were,
even if later it will hurt to think of it.

Of her manuscript, Peterson said: “These poems do their best imitation of a desert.”

But bearing more fruit than one, Peterson’s poems move jaggedly, nonlinearly, jabbing at the senses with consummate poetic sweet talk. Her works may emerge from a wasteland, but they don’t stay there. Instead, they’re restless vagabonds, arriving somewhere between familiar and utterly distant.

“A poem is a place,” she insisted. “It does not describe a place.”