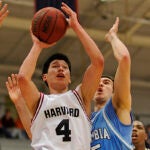 KITA, through its philanthropic arm, the Korea Sanhak Foundation (KSF), has broadened the gift terms of the $13 million Modern Korea Economy and Society Professorship to promote expanded academic opportunities at Harvard. In addition to supporting tenured or nontenured professors in modern Korean studies in the Faculty of Arts and Sciences (FAS), the funds may now be used for related visiting faculty appointments, dissertation research and writing, graduate fellowship support, and research programs in modern Korean economy and society.

“The agreement is wonderful news for KITA/KSF and for the University,” said Jorge I. Domínguez, Harvard’s vice provost for international affairs and Antonio Madero Professor of Mexican and Latin American Politics and Economics. “This is a significant gift, with important implications for Korean scholarship, and we are grateful to KITA and KSF for strengthening a partnership that the University holds in high regard.”

Domínguez praised Il SaKong, KITA and KSF chairman and CEO — who also chairs the G20 Summit Korea Coordinating Committee — for his leadership in reaching a new accord. “Dr. SaKong was instrumental in facilitating the open dialogue that ultimately led to this announcement.”

Harvard President Drew Faust, Lincoln Professor of History, described the agreement as a reaffirmation of the University’s commitment to advancing the field of modern Korean studies in the United States. “KITA and the Sanhak Foundation are enabling Harvard to attract talented faculty and to support young scholars,” she said. “I am grateful to Dr. SaKong for his passionate support of Korean scholarship, and for his efforts to broaden the scope of Harvard’s teaching and research in this important area of study.”

First funded by KSF (formerly the Korean Traders Scholarship Foundation) in 1975, the gift has provided for teaching and research support of junior faculty, and for the naming of a senior faculty member to the chair. Carter Eckert, Yoon Se Young Professor of Korean History and acting director of Harvard’s Korea Institute, held the chair before assuming his current professorship.

The Korea International Trade Association is the largest business association in the Republic of Korea. KITA currently has 65,000 member companies.