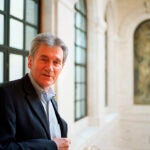 New director of I Tatti

Edmond J. Safra Foundation Center for Ethics recently announced the appointment of Eric Beerbohm as director of the Edmond J. Safra Graduate Fellowships in Ethics. Beerbohm, an assistant professor of government and social studies at the University, is a faculty fellow in ethics at the center for the 2009-10 academic year. In his new role, Beerbohm will work closely with Lawrence Lessig, director of the center and professor of law at Harvard Law School.

Beerbohm’s philosophical and teaching interests include democratic theory, theories of distributive justice, and the morality of public policy. His book manuscript, “In Our Name: The Ethics of Representative Democracy,” examines the moral responsibilities of citizens and lawmakers for political injustice. He has also written on the implications of moral uncertainty for political decisionmaking and the necessary demand of deliberative democracy. During his fellowship, he is working on a relational approach to distributive justice.

“Eric Beerbohm is an extraordinary academic,” said Lessig, “who will inspire our graduate fellows to think more clearly and critically about ethical issues. His research will greatly enhance the scope of our scholarship. I am very pleased to have Eric on board.”

To ensure that teaching and research in ethics would continue into the future, Dennis F. Thompson, the founding director of the center, established the graduate fellowships program in 1990, with the purpose of “training younger scholars who are prepared to dedicate their careers to the study of practical ethics in a wide variety of subjects.” With support from the American Express Foundation, Lily Safra, and Eugene P. Beard, the graduate fellowships program flourished under the direction of Arthur Applbaum, professor of ethics and public policy at Harvard Kennedy School (HKS), who stepped down from the role in 2009. Frances Kamm, Lucius Littauer Professor of Philosophy and Public Policy at HKS and professor of philosophy in the Department of Philosophy, is serving as acting director of the program for 2009-10. To date, Graduate Fellowships in Ethics have been awarded to more than 100 Harvard graduate and professional students.

Beerbohm is a recipient of the Marshall Scholarship and the Mellon Fellowship in the Humanities and Social Sciences. He received his Ph.D. from Princeton University in 2007, B.Phil. in philosophy from Oxford University, and B.A. in political science and the program in ethics in society from Stanford University.