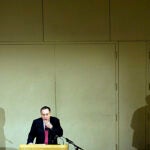 “It’s a particle accelerator … for people.” That is how Michael John Gorman, founding director of Dublin’s Science Gallery, described his efforts to create a public forum for innovation.

Gorman, part of a panel discussion that included a particle physicist who co-wrote an opera, helped to set the mood for Sunday night’s (Nov. 8) opening exhibition of The Laboratory (The Lab) at Harvard, held in the Northwest Science Building at 52 Oxford St.

The Lab, a three-year experiment orchestrated by David Edwards, Gordon McKay Professor of the Practice of Biomedical Engineering, offers a “forum to help catalyze ideas” across many fields. Stemming from his course “Idea Translation” (ES 147), the exhibition of student-based experiments is designed to morph into an ongoing series of events and “idea nights” open to anyone at Harvard with something to show or say.

He said that the program’s “heart is about students” and insisted that “art and science is not an outcome” there, but rather a chaotic and often uncomfortable process that needs to be on display and fully engaged with, rather than trapped inside a studio, lab, or classroom.

About 500-600 people streamed into the cavernous, dimly lit, ground-floor space to encounter a mix of prototypes and ideas in evolution, and to get a whiff of inhalable chocolate, one of the recent commercial “successes” (called LeWhif) cooked up by faculty and student innovators. Visitors dove into the nonculinary offerings, from urban agriculture to biorhythmic rhythms, with zest, engaging the student inventors with questions and compliments.

Elizabeth “Ellie” Nowak ’10 called her experience of developing Vertigrow, a modular planter designed for crowded urban spaces, “the greatest thing I have ever done at Harvard.” What began as an assignment turned into a “class that kept going,” occupying Nowak up to 20 hours per week and eventually taking her to Africa.

Joseph Shivers ’10, an economics concentrator and team member of Life Cell, creators of an easy-to-roll water container and purifier, said he is “still not comfortable” with much of the science and engineering behind the invention. Giving a quick tug on the concept model — a deflated yoga ball with a mesh of wooden dowel rods and rubber bands — he said the project meant you had to “trust yourself to find the solution” and trust others to share their collaborative expertise.

With Soccket, a project that uses the kinetics from kicking a soccer ball to charge a battery hidden within, Jessica Matthews ’10 rekindled her inner science geek. After abandoning the field in high school, since “girls were not really encouraged,” her knowledge of physics and math suddenly came back to her in the process.

Calling their idea “a music-social performance generated from human bio-data,” the inventors of GIGUE entertained a group of onlookers as they made a mad dash to hook up their homemade wires and circuits to a soundboard and sensors. Yi Wei ’10, a music and social sciences concentrator, beamed as she told the crowd that her goal was to make a performer out of everyone and to engage “participants in the creative process of music.”

The Lab is supported by the Faculty of Arts and Sciences at Harvard, the Harvard School of Engineering and Applied Sciences, the Harvard Graduate School of Design, the American Repertory Theater, the Harvard Office of the Provost, the Harvard Initiative for Global Health, the Wyss Institute for Biologically Inspired Engineering, and Le Laboratoire in Paris.