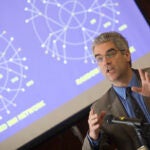 A sculpture that both celebrates and mourns

A starlit tree, draped by a quilt, with meaning culled from America’s racism and lynching — and from a Billie Holiday masterwork — has taken roots at Harvard. This tree by artist Sanford Biggers has just been placed for a monthlong viewing in the transept at Memorial Hall and Sanders Theatre.

“Constellation (Stranger Fruit)” is what Biggers dubs “a surreal tableau.” The work summons heavenly constellations and patterned 19th century quilts embedded with secret codes, both of which helped to steer escaped slaves north along the Underground Railroad.

“This whole notion of navigating the Eastern Seaboard via the stars, as Harriet Tubman did, has been on my mind a lot,” said Biggers of his “tree growing in the cosmos.”

“I think of the installation as abstracting history and creating an infinite reflection between stellar constellations and the points on the Underground Railroad.”

Boston, a central stop on the network of escape routes and safe houses from the South before the Civil War, suitably fits Biggers’ scheme. Approached last year by the Department of Visual and Environmental Studies to teach a class, Biggers coincidentally was contacted shortly afterward by the Office for the Arts (OfA), which hoped to commission a piece.

“So I merged the two,” said Biggers, who became the 2009 Marshall S. Cogan Visiting Artist through the Public Art Program of OfA. Based out of New York, Biggers will join Columbia University’s arts faculty in 2010.

“‘Strange Fruit’ is the mantra present in my work because of its historical value in Americana,” he explained. “The tree is a mixed metaphor. It’s not just a tree of death but a tree of life, an axis mundi between heaven and earth.”

The exhibit runs until Dec. 2. A conversation with Biggers will take place on Nov. 16 at 6 p.m. at the Sackler Museum, and vocalist Imani Uzuri will perform at the installation site at 4 p.m. on Nov. 18, followed by an informal exchange with the artists.

Uzuri will debut two compositions, continuing a collaboration with Biggers that started years ago with a theatrical interpretation of the Abel Meeropol poem “Strange Fruit,” famously sung by Holiday. “She’s the cosmic oracle, a wise chanteuse singing under the tree,” said Biggers.

Koto player Sumie Kaneko and Harvard’s own KeyChange will contribute to Biggers’ artistic journey between earthly and heavenly realms.

For more information visit the Office for the Arts at Harvard.