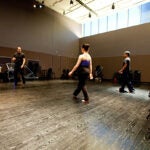 An ode to life

Book says our human networks keep us healthy and whole

Nicholas A. Christakis, M.D. ’89, M.P.H. ’89, used to work in the building adjoining that of James Fowler ’92, Ph.D. ’03, on Harvard’s campus. They did not know each other personally, though they shared a similar interest: social networking. A mutual friend finally introduced the two, and now years later a book is born out of their collaboration. (Fowler now teaches at the University of California, San Diego.)

Its title? “Connected: The Surprising Power of Our Social Networks and How They Shape Our Lives.” Christakis finds it appropriate that a social network was essentially responsible for a book on — ta da! — social networking. And now Christakis and Fowler are presenting their findings to the greatest social network of all — the world.

Christakis’ interest in these effects emerged during his work as a hospice physician (he is also a social scientist at Harvard Medical School) in the mid-1990s. “I was taking care of seriously ill people,” he recalled, “and I began thinking about the widower effect: If one spouse dies, the probability of the other dying is significantly increased.”

Christakis began investigating “the spread of health phenomena in bigger health networks,” and the ways we’re influenced by people up to three degrees removed from us, including those we may not know. The book covers vast turf, from how our friends’ friends can help to make us gain or lose weight — or quit smoking — to the prominence of online social networking and how its presence informs our lives.

“Happiness, information, love, kindness. We even find our spouses via networks,” he said, noting that 70 percent of people marry a friend of a friend. “All these people looking for their soul mate … when really only one out of the 10,000 people — within three degrees removed from us — will be our spouse.”

Named one of Time magazine’s “100 Most Influential People” for 2009, Christakis said his desired influence hits closer to home. He joked: “I just wish I was influential with my kids.”