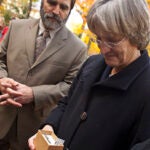 Kermit the Frog, that celebrated American philosopher of the last century, famously observed that it isn’t easy being green.

But if frogs are in trouble, think of the ontological suffering that humans undertake. They are born with awareness, and from the beginning search for identity in a world of complex moral choices.

The first of the traditional Tanner Lectures on Human Values this week (Nov. 4) took up the tangled struggle toward being, in a session called “Becoming Human Is Not That Easy,” delivered by Jonathan Lear, who teaches philosophy at the University of Chicago and has a parallel career as a psychoanalyst.

His last book, published by Harvard University Press, was “Radical Hope: Ethics in the Face of Cultural Devastation” (2006). In it, Lear explored another vulnerability that humans face during their lifelong struggle for identity: how to cope with the collapse of civilization. His test case was Plenty Coups, the last great chief of the Crow Nation, who observed that, “When the buffalo went away, the hearts of my people fell to the ground.”

Lear’s Tanner series, “Irony and Identity,” resumed Thursday afternoon (Nov. 5), and will be followed by a 10 a.m. public seminar Nov. 6 at the Barker Center’s Thompson Room.

This is the inaugural Tanner series for the Humanities Center at Harvard, which from now on will sponsor the lectures at Harvard. (Eight other institutions worldwide host Tanner Lectures, a tradition founded 31 years ago.

Center director Homi Bhabha introduced Lear as a pioneering scholar with “a revisionary sense of irony,” whose work explores “the everyday work of being.”

And he praised lecture commentator Cora Diamond, a University of Virginia moral philosopher, for her sense that literature has little appreciated ethical significance.

Lear began by wondering out loud: What is so hard about becoming human? He told his first-day audience, which nearly filled Lowell Lecture Hall, that one philosophical trend “conceives of humanity as a task,” and that task — that struggle to “self-constitution” — is linked to the idea that we are in search of an ideal.

Meanwhile, said Lear, each of us takes up a “practical identity,” a self-description by which we value ourselves. Inhabiting this practical identity — whether as a teacher, doctor, or student — commits us to the norms of the society around us, and is a bulwark against what might lead us astray.

We must inhabit our practical identities well, said Lear, in order to live by our judgment. This makes being human an arduous task. “It can be tough work, fending off those temptations that would undo our claim to be the person we are,” he said. “Fidelity to oneself is not for the fainthearted.”

That fidelity requires self-reflection. But most of the time, most of us are at least “perfectly sure of being human and knowing what it means to be a human being,” said Lear, quoting a journal entry from the 19th century Danish philosopher Søren Kierkegaard

Lear used Kierkegaard as a way to explore a further dimension of the “tough work” of becoming human. It’s a dimension that demands more than self-reflection while in the rush of life — what Kierkegaard in the same journal entry said of existence, that it was “a hallucination, tomfoolery, a ruckus, a hubbub, busyness.”

This further dimension of becoming human demands the kind of lifelong irony embraced by the ancient Greek philosopher Socrates, said Lear, “a form of not being perfectly sure” what it is to be a human being.

Or as Kierkegaard put it: “Socrates doubted that one is a human being by birth; to become human or to learn what it means to be human does not come that easily.” Lear posited a divide in the way most of us think of life. There are those who are “perfectly sure” of being human and those, like Socrates, who are “imperfectly sure.”

Socrates led an “ironic existence,” one that was always questioning our humanness. It was in part a response to the limits of reflection, the activity most of us use to periodically question our practical identities.

Kierkegaard said being a Christian is an example of one “practical identity” on which we might reflect. But reflection on Christianity right away presents a problem, said Lear, since “the reflection itself is a way of saying that Christianity exists.” Because of this, reflecting on Christianity has the consequence of never being able to get outside it.  That is the “illusion of Christianity,” said Lear, that “there is no outside.”

In this situation, he said, “irony can help.” But only if the irony is more than witty remarks, or, as in sarcasm, deliberately saying the opposite of what you meant. What is needed to break through the limitation of mere reflection is the irony of Socrates, a “robust irony,” said Lear, that transforms questioning and doubt “into a capacity for excellence.”

Mere reflection traps us within Christianity or some other construct of identity, and in turn leads us away from the ideal. But robust irony is “an occasion for disorientation and disruption,” said Lear. It takes away our practical identity and hands it back to us as something unfamiliar.

Lear chose a secular example: being a teacher. Regarded with true irony, this profession could yield “a massive disruption of more or less who I am,” said Lear, “a disorientation of a world that until now has been familiar.”

This is different from irony as a sense of social detachment, said Lear. It is more like “an intense moment of god-sent madness,” he said, employing a phrase from Plato, who believed “the greatest of goods come to us through madness, provided it is bestowed by divine gift.”

Plato believed that all philosophy rises from “disruptive, disorienting experience,” said Lear, something like the experience of irony, which breaks into “the chaos of social pretense” in its search for meaning.

Kierkegaard made the original observation that prompted Lear’s first lecture: that becoming human is not that easy, and that the task of identity is in part the practical task of achieving excellence. Kierkegaard also believed that “no genuinely human life is possible without irony.”

To flourish, said Lear, a human must step outside of a practical identity, and “cultivate an experience of oneself as uncanny and out of joint.”