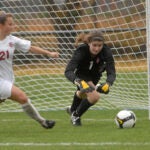 Crimson edged in NCAA first round

Crimson fall at home to Quakers, 17-7

In a classic “win or go home” battle for the Ivy League Championship, Harvard and Penn went head-to-head for the 80th time on Nov. 14. In the end, Penn was not going home.

Going into that game, both teams shared 6-2 records and were undefeated in conference play at 5-0.

Penn proved to be a tough challenge for the Crimson, and it didn’t take long for the Quakers to get on the scoreboard. On their opening drive, Penn scored the game’s first points on a 51-yard touchdown pass, taking a 7-0 lead.

Then, just as they did in the first quarter, the Quakers found the end zone to open the second, going up 14-0. Before the half ended, Penn added a field goal to make the score 17-0.

Harvard, who had difficulty moving the ball against the league’s top defense through most of the game, finally found the end zone late in the third quarter on a 45-yard touchdown pass to Chris Lorditch ’11. But those were the only points they could get, as the Crimson were shut out in the final quarter.

Harvard quarterback Collier Winters ’11, who went 10-23 for 135 yards passing and a touchdown, led the Crimson in rushing, with 57 yards on a career-high 18 carries.

On defense, junior defensive back Collin Zych led the Crimson defense with 10 tackles and two passes broken up.

The loss dropped Harvard to second in the league, one game behind Penn. For the Crimson to claim their third consecutive Ivy championship, they will need to win at Yale (4-5; 2-4 Ivy League) on Saturday (Nov. 21), and Penn will have to lose at home to last-place Cornell (2-7; 1-5 Ivy League).