A comeback for the ages 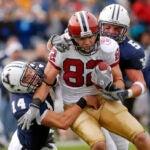 It was a classic that neither the Harvard nor the Yale faithful at the Yale Bowl will soon forget. In a game defined by risk and reward, bold decisions by both coaches added to the legacy of one of college football’s oldest and most storied rivalries.

Down 10-0 in the fourth quarter with 8:10 remaining in the game, head coach Tim Murphy’s decision not to punt on fourth down and four yards to go resulted in a 19-yard run by running back Gino Gordon ’11 to give new life to the drive and revive Harvard’s chance at a comeback.

Two plays later, Crimson quarterback Collier Winters ’11 found wideout Matt Luft ’10 down the field for a 41-yard touchdown, bringing Harvard right back into the game and within a touchdown, 10-7.

On the very next possession, Yale failed on a gutsy fourth-and-22 call from their own 26-yard line, giving the Crimson the ball back in Bulldog territory with less than three minutes to go in the game.

Not squandering the opportunity, it only took Harvard three plays to get into the end zone; Winters found Chris Lorditch ’11 down the middle of the field for a 32-yard reception to give Harvard a 14-10 victory.

Winters, who came up clutch when the Crimson needed him to, finished the day with 211 yards passing, 51 yards rushing, and two passing touchdowns.

Gordon finished the day with 86 yards rushing on 13 carries and, in addition to the game-winning touchdown, Lorditch racked up 104 yards receiving for the Crimson on five receptions.

With the win — Harvard’s eighth in nine years over Yale (4-6; 2-5 Ivy League) — Harvard finishes the season with a 7-3 (6-1 Ivy League) record and in second place in the Ivy League. The victory comes a week after the Crimson lost in their home finale to Penn, ultimately impaling their hopes for a third-consecutive Ivy League title.

But the seniors went out on a high note with the Crimson’s fourth-quarter comeback — one that will go down in history as a comeback for the ages.

“In the end, it’s all about not giving up,” Murphy said after the win. “That’s the kind of kids we have. That’s what happened out there today.”