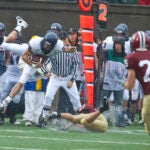 Crimson forward and co-captain Andre Akpan ’10, who was named to the All-Ivy League first team for the fourth time on Tuesday (Nov. 17), has added another accolade to his already lengthy resume by being crowned Ivy League Player of the Year.

Akpan, who was also named to the Top Drawer Soccer National Team of the Year (Nov. 19), finished the regular season first in the league in nearly every statistical category, holds the Harvard career points (33) and assists (123) records, and is two goals behind Chris Ohiri’s ’64 goals-scored record (47) going into the NCAA tournament.

Freshman forward Brian Rogers received the Ivy Rookie of the Year and second-team All-Ivy honors. Rogers is the sixth Harvard freshman to win the award. Rogers, who was named Ivy Rookie of the Week twice this season, assisted on three game-winning goals this season in addition to tallying three game winners.

On Sunday (Nov. 22), Harvard will host the second round of the NCAA tournament, playing the winner of Friday’s (Nov. 20) match between Monmouth and the University of Connecticut. Game time is 1 p.m.