What a set of pipes 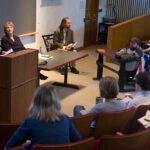 HDS and the Civil War scholar

To fulfill the acoustic demands of the Memorial Church and Appleton Chapel, a solution is finally at hand

Members of the staff at Harvard’s Memorial Church have been struggling over a musical quandary for years: the impressive product of a Harvard-educated scientist.

Charles Brenton Fisk showed a gift for physics early on. As an 18-year-old World War II draftee, the government quickly recognized his talent and sent him to work with Robert Oppenheimer during the preliminary stages of the Manhattan Project.

But nuclear particles and cosmic rays held less appeal to Fisk than the mechanics of a massive musical instrument, and in 1961 he founded an organ-building company in Gloucester, Mass., which specialized in the creation of mechanical “tracker” organs. Two years later Fisk began construction on the instrument currently located in Appleton Chapel.

Standing next to the Fisk organ’s gleaming pipes that extend from floor to ceiling in the vaulted chapel full of dark oak, one can hardly question its ability to produce ample sound. The problem is that the sound is too loud, and, surprisingly, too soft.

“Essentially there are two different spaces in the church, which pose problems musically,” said Edward Jones, Gund University Organist and Choirmaster. “The organ is trying to serve two purposes; one is to be an intimate accompanying instrument for our Appleton Morning Prayers service, and the other is to be the big, beefy instrument for Sunday worship. It’s an impossible mandate.”

The dilemma involves the church’s original design. On either side of the small chapel — separated from the main church by a wooden gate — are decorative white grills that camouflage several empty spaces created in 1932 for the church’s first organ, an electro-pneumatic Æolian-Skinner, and its own enormous set of pipes.

In 1967, church officials, deeming the Fisk organ better suited to the German and Lutheran repertoire popular at the time, had it installed in the Æolian-Skinner’s place. But today, when the Fisk’s pipes, which are not housed in the side compartments but stand exposed, try to extend their music into the main church, the hollow chambers swallow much of the sound. Conversely, the Fisk’s big sound can often overwhelm Appleton Chapel.

To solve the problem, Jones along with a committee created to address the issue — led by the Rev. Professor Peter Gomes, the Plummer Professor of Christian Morals and Pusey Minister in the Memorial Church — decided on a two-organ solution. They have purchased another electro-pneumatic organ, built in 1929 by the Skinner Organ Company, from a church in Hartford, Conn., that will take up residence in the chapel. The Skinner pipes will once again occupy the hollow spaces on each side, offering a more muted tone. In addition, the committee has commissioned a new, custom-built Fisk organ for the church’s second floor, rear gallery, which will provide the main body of the church with the big sound it requires.

“We think it’s a really wonderful solution musically and liturgically for such a thriving church,” said Jones. The decision also maintains the church’s ties to the mechanical organ tradition and Fisk’s legacy.

While electro-pneumatic organs use electricity to control the flow of air through an organ’s pipes, tracker organs employ rods called trackers that enable a direct, mechanical connection between key and pipe. When a key is pressed, one of the interconnected rods in this series of trackers opens a valve under the pipe to allow air to flow in.

“How you touch the key directly impacts how the air speaks through the pipe,” said Jones, adding that the tracker organ offers a rich repertoire of color and tone that differs from electro-pneumatic organs.

The new organs will bring an added benefit to the church. With the removal of the original Fisk organ, the chapel’s giant Palladian window will once again be exposed, no longer blocked by the Fisk’s tall pipes.

“Appleton will be bathed in light, which will be absolutely fabulous,” said Jones. “It will be wonderful to restore the chapel to its former glory.”

The removal of the old Fisk organ will begin in spring 2010 and will take about a week as the approximately 4,500 pipes are individually removed, wrapped, and placed into separate boxes in preparation for shipment. The Fisk’s new home will be a Presbyterian church in Austin, Texas.

The new Skinner organ will be ready to go by next fall. Jones hopes to have an opening celebration for the new Fisk organ on Easter Day 2012.

The two new organs will be completely funded by individual donors, drawn in large part from the Memorial Church’s congregation. The project will cost $6 million to complete.

To honor the Fisk’s last year at Harvard, the church will host a series of master classes and concerts featuring organ maestros past and present at the University. The free series begins Oct. 6 and will be presented with support from the Harvard Provostial Fund for the Arts and Humanities.

For more information about the The C.B. Fisk Op. 46 Celebration Series.