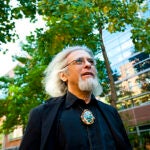 Donald B. Rubin, Ph.D. ’70, the John L. Loeb Professor of Statistics, was elected a corresponding (foreign) fellow for distinction in research at the Annual General Meeting of the British Academy on July 16. The British Academy, which is the United Kingdom’s national academy for the humanities and social sciences, has more than 900 fellows, including psychologists, economists, historians, lawyers, theologians, and criminologists, among others.