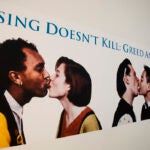 As a young girl born in India, raised in a Muslim household in Pakistan, and educated by Catholic nuns, Samina Quraeshi lived at the intersection of multiple faiths, cultures, and customs.

It was an intersection that Quraeshi was taught to believe was never mutually exclusive.

Quraeshi’s family, who descended from a long line of custodians of a Sufi shrine in northern India, explained that in the Sufi tradition of Islam messages of love and tolerance were paramount, and all paths lead to the Divine.

“As a child I was never told, ‘This is Christian and this is Muslim.’ I was taught that, according to the Sufi tradition, all paths lead to God.”

Quraeshi, who has made her home in the United States for more than 30 years, became troubled by monolithic and violent characterizations of Islam in the post 9/11 era, and decided to explore the religious traditions she grew up with in her work as an artist and scholar. In a new exhibition at the Peabody Museum of Archaeology and Ethnology, she draws upon her experience as a Muslim woman to examine Islam’s complexity through the lens of South Asia’s Sufi tradition.

“This project is an investigation, from an artistic point of view, of the Sufi tradition in South Asian Islam,” said Quraeshi. “I believe that Islam is an inspiration and a way of life, not a set of laws. Instead of a rigid wall, it is a living tradition.”

In the exhibition “Sacred Spaces: Reflections on a Sufi Path,” which opens Oct. 22, Quraeshi documents Sufi shrines in Pakistan and India to explore the mystical dimension of Islam through the use of photographs and multilayered, mixed-media compositions.

Inspired by Sufi teachings and places of devotion in the subcontinent, Quraeshi said her compositions explore “the complex relationship between place, symbol, poetry, music, oral tradition, and visual art in Islamic mysticism. My aim is to look beyond the boundaries of ideology, race, culture, and language to evoke a visual dialogue between cultures.”

Quraeshi’s new book “Sacred Spaces: A Journey with the Sufis of the Indus,” examines Sufi traditions and practices in South Asia and is published by the Peabody Museum Press (2009).

Quraeshi also collaborated with the Arthur M. Sackler Museum on a companion exhibition currently at the museum’s Islamic and Later Indian gallery. That show, titled “Sacred Spaces: The World of Dervishes, Fakirs, and Sufis,” is on view through Jan. 3, 2010. Several of the collages in Quraeshi’s Peabody exhibition relate directly to those on the walls at the Sackler.

In the Peabody show, a display of multimedia images, developed around Sufi manuscripts and incorporating photos, paintings, and drawings, makes up what Quraeshi calls her answer to the original, intricate, calligraphic Sufi texts on view at the Sackler. “In the Sackler they are their pure form. Here they are my interpretations.”

Quraeshi’s background is as diverse as her work. An author, educator, and artist, she received her bachelor’s degree in fine arts from the Kansas City Art Institute and her master’s degree of fine arts from the Yale University School of Art. She has taught at the Rhode Island School of Design and at the Boston School of Visual Arts, and served as director of design at the National Endowment for the Arts from 1994 to 1997.

She also has strong ties to Harvard. It was while she was a research scholar at the Carpenter Center for the Visual Arts (where she later served as assistant director in 1993) that she was encouraged by the late Annemarie Schimmel, then Harvard professor of Indo-Muslim culture, to explore Sufism further. In a frank conversation, Schimmel told Quraeshi that she should build a bridge between the academy and the world outside on the spiritual aspects of Islam.

“She told me, ‘You need to tell it from the eyes and the soul of a Muslim woman. You were born into it. This is your job.”

With her current book and exhibition acting as that cultural connection, Quraeshi aims to engage people in the mystical dimensions of Islam and encourage a broader understanding of the universality of spiritual quests.

“No matter what the religion, the language, or the culture, to seek a physical space for contemplation is a universal impulse. We are all intrigued by these big questions, but you can only grapple with them in small ways through the means at your disposal. The means at my disposal is visual art, and I feel tremendously lucky to have had the opportunity to explore these questions in my work.”

Quraeshi is also the museum’s first fellow under the Robert Gardner Visiting Artist Fellowship. Created by Gardner, renowned documentary filmmaker and former director of the Film Study Center at Harvard, the fellowship allows an established artist the opportunity to create and display original work at the museum. For Quraeshi, the program has allowed her to collaborate with scholars from across the University. She likened the experience to that of a kid in a candy shop.

“There are not enough hours in the day to interact with everyone. I just wish I could hang around here for the rest of my life.”