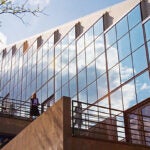 Around the Schools: Graduate School of Design

Mary Lee Ingbar, Radcliffe ’46, Ph.D. ’53, M.P.H. ’56, who was a pioneer in applying quantitative and sophisticated computer analysis to the developing field of health economics in the 1950s and 1960s, died in Cambridge, on Sept. 18.

Ingbar was especially interested in the relationships between cost, quality, and outcomes of medical care.  She brought insights from the fields of econometrics and operations research to bear upon the variability of the costs of medical care from one health care setting to another; to this end, she developed what in all likelihood was the first comprehensive statistical and econometric computer software program for analyzing hospital costs. In this work, she collaborated closely with Professor John Dunlop of Harvard (later U.S. secretary of labor) and Lester D. Taylor.  She and Taylor wrote “Hospital Costs in Massachusetts” (Harvard University Press, 1968), one of the first econometric studies of hospital costs ever to be published.

In the early 1970s, while associate professor of health economics at the University of California, San Francisco, Medical School, Ingbar was a member of the California Hospital Commission, where she participated in the design and implementation of an innovative program for detailed reporting of hospital expenses and health outcomes, which allowed comparisons of costs and efficiencies of care, and helped to establish the oversight of then-emerging forms of health care delivery, such as health maintenance organizations.

In the late 1970s and 1980s, Ingbar worked to advance the use of computerized databases to track health care events, costs, and outcomes in medical care delivery systems that were growing increasingly large and complex. During these years, she held professorships at the University of Massachusetts Medical School and at the Amos Tuck School of Business at Dartmouth.

Ingbar remained a principal research associate of the Department of Social Medicine at Harvard Medical School for the remainder of her life.  She served as an Overseer for the Brigham and Women’s Hospital and as a member of the Corporation of Partners Healthcare System. Ingbar was very active in the American Public Health Association (APHA); she was a member of the APHA Governing Council and a chairperson of the APHA Medical Care Section. She was consultant on health economics to many organizations, and in recent years served on the Council of the Alumni Association of the Harvard University Graduate School of Arts and Sciences.

Ingbar was born and raised in New York City. Her mother, Ruth P. Mack, was a noted economist. Her stepfather, Edward C. Mack, was a professor of English literature at the City College of New York.  John E. Mack, her stepbrother, was a professor of psychiatry at Harvard Medical School and received the 1977 Pulitzer Prize for his biography of T.E. Lawrence

Donations in honor of Mary Lee Ingbar may be made to the Lung Cancer Alliance and High Horses Therapeutic Riding Program. A memorial will be held at a later date.