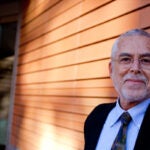 A look back at the decade and a look around the next corner were both on the agenda at Wednesday night’s (Oct. 21) Harvard Kennedy School forum, “Why Human Rights Matter: Human Rights as Public Service,” celebrating the 10th anniversary of the Carr Center for Human Rights Policy.

Founded in 1999 with a gift from Harvard Kennedy School (HKS) alumnus and voicemail entrepreneur Greg Carr, the center seeks to train future human rights leaders and to lead policy debates by working with governments, human rights organizations, and other groups —  such as corporations and the military — not traditionally considered players in the field. Expanding the definition of human rights to include such nontraditional participants was a recurring discussion theme.

“None of [those working with the center] from the beginning were traditional human rights specialists,” said Samantha Power, the Carr Center’s founding executive director and a Pulitzer Prize–winning author. “That informed the way we looked at human rights — not a narrow-based approach, but in a sense centering on how to increase human welfare. What FDR called freedom from fear and freedom from want.”

One of the most gratifying aspects of her work with the Carr Center, Power said, was to see how questions being asked 10 years ago were no longer on the table. On the other hand, she asked, if “everyone” agrees that human rights protections are necessary, “Why do things still lag behind?”

But Sarah Sewall, the center’s director from 2005 until this year and a lecturer in public policy at HKS, said she wasn’t sure the fundamental questions had indeed changed. “The questions are still: What are human rights and how best to promote them,” she said. Other questions touched on during the evening concerned how to galvanize a multifaceted response to human rights issues, and how to “move not just American machinery,” as Power put it, “but also international machinery” on issues such as global warming, human trafficking, mass atrocities, and state-building.

Parallels to the human rights issues of a decade ago continue. Among its early efforts, the Carr Center retrospectively examined Power’s support of using force in Bosnia, which she covered as a journalist for The New Yorker, Time Magazine, and other publications, and the same position taken regarding Kosovo by Michael Ignatieff, director of the Carr Center from 2000 to 2005 and the author of “Virtual War: Kosovo and Beyond.” In both cases, panelists pointed out, military intervention was vindicated.

“Ten years has completely changed the way we look at these things,” said Rory Stewart, the center’s current director and the moderator of the panel. “After Bosnia, it may have seemed intervention was a good thing. Now, after Iraq and Afghanistan, it’s far from obvious.” In those countries, he pointed out, “Frankly, it’s not quite clear to us what we hope to achieve.”

But by the end of the evening what was clear was that the center, at least, had achieved much in its first decade, including making substantial contributions to discussions on genocide, state-building, national security, the responsibility to protect, and civil rights.

Stewart ended the evening by saying the anniversary was “a very, very exciting moment for us.” He didn’t want to seem self-congratulatory, however. “We don’t have all the answers,” he said. In many cases, he said, “it can be very difficult to decide what to do.”

In working toward that end, he added, the center tries to keep in mind two slogans. The first, from Ignatieff, extols “pessimism of intellect and optimism of will.” The second, from Harvard man T.S. Eliot, maintains that “The only wisdom we can hope to acquire is the wisdom of humility: Humility is endless.”