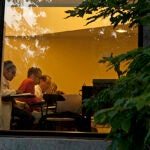 A century of everyday learning

Along the hallway where dignitaries often stride, first-year students and their parents amble through Wadsworth House, gazing at photographs of past recipients of honorary degrees. University Marshal Jackie O’Neill shares stories of Wadsworth, one of Harvard’s most historic buildings, where George Washington lived for a time.

Then, many first-year students and their parents tour Widener Library, the University’s flagship reference center for the humanities and social sciences. Opened in 1915, Widener is home to mazes of metal stacks that contain its vast holdings. Parents take in the library’s grandeur — its impressive reading rooms, its specialty collections, and the grand stairwell accented by two John Singer Sargent paintings — treasures that their children will enjoy for the next four years.