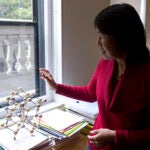 An
insight from the labs of Harvard chemist George M. Whitesides and cell biologist
Donald Ingber is likely to make a fundamental shift in how biologists grow and
study cells – and it’s as cheap and easy as reaching for a paper towel.

Ratmir
Derda, a postdoctoral student co-mentored by Whitesides and Ingber at Harvard’s
new Wyss Institute for Biologically Inspired Engineering, has realized that by
growing cells on several sheets of uncoated paper, he can solve a problem that
has bedeviled biologists for years: how to easily grow and study cells that
mimic the three-dimensionality of real tissue.

This
work will simplify creation of realistic, three-dimensional models of normal or
cancerous tissue – potentially making it faster and easier to find drugs that
fight cancer and other diseases.

“This
research has the potential to become a standard laboratory tool, alongside the
Petri dish, in laboratories that work with cells,” said Whitesides,
the Woodford L. and Ann A. Flowers University Professor at Harvard
and a founding faculty member of the Wyss Institute. “Filter paper and other
kinds of paper are readily available, and the technique is both very flexible
in what it can do, and very convenient to use.”

The
study, “Paper-Supported Three-Dimensional Cell Culture for Tissue-Based
Bioassays,” appears in the October
19, 2009, issue of the Proceedings of the National
Academy of Sciences.

Now,
researchers grow cells in a Petri dish, creating a thin, two-dimensional layer
of cells. If they want to do a better job of mimicking real tissue, they
culture the cells in a gel. But because cells in different locations get vastly
different amounts of oxygen and food, these cultures fail to mimic real
tissues. And studying the cells from different parts of these gels without
destroying the 3D culture is tricky.

By
growing the cells in a thin layer of gel supported by paper, and then stacking
those pieces of paper, the scientists showed they could recreate the benefits
of two-dimensional research – where cells receive a uniform amount of oxygen
and food — while also closely mimicking real tissue. In this case, they engineered a 3D tumor
on paper that exhibited behaviors similar to a cancer in the body.

Stacking
multiple cell-containing sheets also allows researchers to examine the interior
of a large cell cluster, either cultured on a dish or grown in vivo, simply by
peeling the layers apart, without disturbing the properties of the cells. Isolating cells grown with other 3D
culture techniques requires either performing complex laser-assisted surgery on
the tumor sections or destroying the architecture of the tissue and then
sorting the cells.

Derda said he
had the initial insight that led to this study when he heard a colleague
complain that he couldn’t use paper to filter blood, because the erythrocytes,
which give blood their red color, are sometimes trapped in the paper and
sometimes go through it. Derda, who developed and used peptide arrays for stem
cell research in his Ph.D. work, thought he might be able to use this
trapping property for high-throughput screening. When he discussed that insight
with Whitesides, the older chemist suggested Derda try stacking the pages
instead.

Fellow
postdoctoral student Anna Laromaine helped Derda figure out how to clip
multiple layers of paper together while submerged in the gel, allowing the
first multi-layer cell culture to grow. When he gingerly pulled the sheets of
paper apart and saw that the cluster retained its geometry, he realized the
versatility of paper as a growing medium and its potential to mimic any three-dimensional
tissue.

“The best thing
about this approach is that it can be used by everyone,” Derda said. “Paper is
nearly free, it’s all over the place and you don’t have to know anything other
than how to dip.”

In
addition to Derda, Whitesides and Ingber, the founding director of the Wyss
Institute, a faculty member at Harvard Medical School and its School of
Engineering and Applied Sciences, and a researcher at Children’s Hospital
Boston, the paper’s other authors are:
Akiko Mammoto and Tadanori Mammoto of Ingber’s lab, and Laromaine and Sindy
K. Y. Tang of Whitesides’ lab.