‘The Donkey Show’ kicks off a first season for Diane Paulus 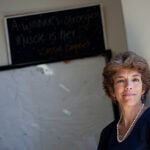 Child psychiatrist pens her past

The Bard meets boogie in this disco delight

In 1613, London’s Globe Theatre — a venue open to royal and peasant alike — burned to the ground. No one was hurt. When one man’s pants spouted flames, they were quickly doused with a mug of ale.

As a writer of comedies at least, Shakespeare would have liked that plot: After much confusion, nobody gets hurt, and a dose of ale does a lot of good.

The Bard would have liked “The Donkey Show,” too, which kicks off a new season for the Harvard-affiliated American Repertory Theater (A.R.T.), said Diane Paulus ’88.

She’s the show’s director, as well as the A.R.T’s new director. Paulus is also the creator of the troupe’s new satellite venue at 2 Arrow St.: Oberon, a nightclublike space where “The Donkey Show” unfolds like a play within a party.

The high, dark cubical space replicates the spirit of the old Globe, Paulus said, mixing patrician and plebian, and avoiding the old paradigm of watching theater from chairs bolted to the floor.  (Before, during, and after “The Donkey Show,” patrons are free to dance, drink at the bar, and mingle with the actors.)

Paulus and her producer husband Randy Weiner first put this disco-era retelling of Shakespeare’s “A Midsummer Night’s Dream” together in 1999. It ran for six years in New York City and after that on stages all over the world. Like the Shakespeare play, “The Donkey Show” intermingles gods, fairies, peasants, and nobility. And of course — as in Shakespeare and in disco alike — love reigns and love deceives.

“I’m boldly taking a new approach,” said Paulus of the season opener, which invites the audience into the action to the throb of ’70s music lit by spangling light from a disco globe overhead. “It’s not just a play on the stage.”

The show at Oberon, 50 minutes long, is the first in a “festival” of three shows called “Shakespeare Exploded.” (The next will filter “Macbeth” through Hitchcock-like mysteries; a third will retell “A Winter’s Tale” through R&B music.)

“A Midsummer Night’s Dream” is an extravaganza of language. Its characters alone have names that both roll off the tongue and amuse: Puck, Bottom, Snug, and Snout.

But the same names (and Shakespeare’s plot) also hint at the sexual overtones that often underlay these 400-year-old plays — a bawdiness that “can sometimes get pushed aside” on stage, said Paulus. “Shakespeare would appreciate the kind of sexuality that a club environment naturally unleashes on a story.”

Yes: “The Donkey Show” is a thing of sweat, glitter, and barely clad bodies — an adult party with a play running through it. The disco setting also gives fuller expression to one Shakespeare plot twist: Addled by the love potion, Titania awakens to fall in love with the first thing she sees — a donkey.

“The Donkey Show” is an exaggerated celebration of heterosexuality, but it is also an exploration of the sexual ambiguity that marks the historical Shakespeare. In Paulus’ disco setting, most of the male characters are played by women in mustaches — perfect, she said, for the topsy-turvy, carnival world that her play invites the audience to join.

Here Paulus channels Shakespeare again, a man who was at heart more than a writer, she said. “He was a theater man. What did he care about? Audience.”

Paulus is convinced that the A.R.T. audience will like “Shakespeare Exploded” and the two other festivals that follow it this season — for the rules they break and the boundaries they stretch. “They are quite an adventurous audience,” she said. “They know A.R.T. stands for not very typical theater.”

Paulus is also sure that “The Donkey Show” and plays like it will bring in nontraditional audiences. For one, she said, “the theater needs young people” so they can experience the relevance and power the arts can have in their lives.

“The Donkey Show” ends on a Shakespearean comedic note. Jealousy and cruelty and the darker side of love fade away. The world is new — choate, orderly, and just.

Dreamlike, the right lovers wake harmoniously next to each other. That splash of ale has done its work.