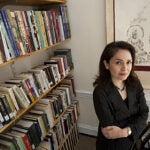 Taking the next step

A group of elementary and secondary teachers from around the Northeast were immersed in oil this summer, during a weeklong Harvard workshop that aimed to highlight the depth and complexity of oil’s influence in energy markets, politics, and the environment.

The workshop, “Oil and the Contemporary Globe: A Multi-Regional/Multi-Subject Study on the Modern World’s Foundation,” was the brainchild of outreach coordinators for three of Harvard’s academic centers focused on oil-rich regions: the Center for Middle Eastern Studies, the Davis Center for Russian and Eurasian Studies, and the David Rockefeller Center for Latin American Studies.

Cris Martin, outreach director for the Davis Center, said that the coordinators worked with a group of eight teachers to design the event, which ran from Aug. 10 to 14 and drew about 40 teachers from Massachusetts, Rhode Island, and New Hampshire. Teachers who attended were eligible for continuing education credits through Framingham State College.

Paul Beran, of the Center for Middle Eastern Studies, said that the workshop was designed to give the teachers an understanding of the complexity of the issues surrounding oil, as well as to provide regional contexts on the subject from the Middle East, Russia, and Latin America.

Among the topics covered during the five days of presentations were oil supply and marketing, oil in regional contexts, oil and foreign policy, oil scarcity and manipulation, oil and climate change, and beyond oil to new energy sources. The teachers listened to a host of lecturers, participated in hands-on exercises and discussion groups with fellow participants, and crafted lessons from the materials provided.

James McCarthy, Agassiz Professor of Biological Oceanography, spoke about the evidence for climate change and its potential consequences. McCarthy, who has been involved in research in the Arctic and who played a key role in forming the Intergovernmental Panel on Climate Change’s (IPCC) 2001 report, said the IPCC’s predictions on the consequences of human-caused warming tend to be conservative.

During his discussion, McCarthy put climate change in historical perspective and talked about the mechanisms that result in climate change.

McCarthy said he particularly welcomes the opportunity to speak to middle school and high school students and teachers because resources to learn more about climate change might be difficult to find.

“On most college campuses, students interested in climate change can find members of their faculty and student organizations to help them to understand what science tells us about climate change and why reducing greenhouse gas emissions is essential if we are to minimize negative climate impacts over the course of this century,” McCarthy said. “These resources are more difficult for students to find in middle schools and high schools. Thus, anything we can do to help teachers in these schools connect to climate scientists and access the most recent research findings is well worth the time and effort.”

The effort was appreciated, according to teachers responding to McCarthy’s talk.

“He filled in a bunch of holes for me,” said Ryan Quinn, a history teacher at Masconomet Regional High School in Boxford, Mass.

Quinn said the week’s sessions were valuable to him personally as well as professionally, increasing his understanding of oil and climate change in ways that extend beyond what he will use in the classroom. As an example, he said he now realizes that it’s unlikely oil will run out entirely as an energy source, but as supplies dwindle, it may not be economical to extract it.

“This was fantastic, more than I ever expected. I learned that the topic is more complex than I ever understood,” Quinn said.

Erin Yablonski, a fourth-grade teacher at Mill Pond School in Westborough, Mass., said the lessons for her younger students won’t go into the depth that she heard during the week, but said the basics of energy and conservation are still important topics for them to hear.