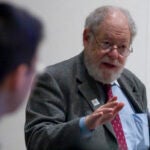 Harvard’s John F. Kennedy School of Government (HKS) will present the 2009 Roy Family Award for Environmental Partnership to the Mexico City Metrobus, a bus rapid transit system that reduces air pollution and greenhouse gas emissions while improving the quality of life and transportation options in one of the largest cities in the world.

The award — given biannually to celebrate an outstanding public-private partnership project that enhances environmental quality through the use of novel and creative approaches — will be presented to the recipients at an HKS event later this fall. The purpose of the Roy Family Award is to draw attention to an exceptional partnership and its achievements while inspiring others to replicate or expand upon its success.

Metrobus opened in 2005 and has reduced carbon dioxide emissions from Mexico City traffic by an estimated 80,000 tons a year. The buses, which operate on clean-burning ultralow sulfur diesel fuel, make more than 450,000 trips per day.

Mexico City Mayor Marcelo Ebrard has applauded the Metrobus system, saying he wants to extend the system to 10 bus lines. “If we make it greener,” he said of his city, which is known for its extreme pollution, “the city will be able to survive.”