HDS and the Civil War scholar 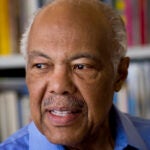 The president was a guest lecturer for the course “Introduction to the Histories, Theologies, and Practices of Christianity,” a broad-based introduction to Christianity. The class is required for first-year HDS master’s students. Faust talked to them about her book, “This Republic of Suffering: Death and the American Civil War.”

“Her scholarship is a great illustration of the kind of possibility you have when different parts of a university speak to one another,” said one of the course’s two instructors, Dan McKanan, Ralph Waldo Emerson Unitarian Universalist Association Senior Lecturer in Divinity. “She’s a historian, not a theologian, but she writes about death and dying in ways that are very illuminating for people preparing for ministry, preparing for the task of walking with their parishioners through death and dying.”

Emily Click, assistant dean for ministry studies and field education and lecturer on ministry studies, also teaches the course.
Faust said her most recent book explored the effects of the unprecedented number of Civil War dead that came to define the era on many levels, from the practical physical demands of dealing with burying the hundreds of thousands of soldiers to the “political implications of such loss.”

“I felt we needed to look at this issue in a way we haven’t before.”

Faust, Lincoln Professor of History, came to the topic, she told the crowd, while doing research for an earlier book about women of the slaveholding South. While poring over their diaries and letters, the Civil War scholar said the theme of death emerged repeatedly.

“I began to see the war through their eyes, and see the overwhelming force of an aspect of the war we have, I think, forgotten — the emotional impact as well as the social impact of death.”

No one anticipated the level of carnage wrought by the war, said Faust, who noted that aside from the massive effort it took to deal with the countless bodies, the emotional toll of such a vast number of fatalities was overwhelming.

With her work, Faust said, she attempted to ask, “How do humans adapt to [such a] level of loss, and how do you understand what it means to be human once that kind of devastation of the human has taken place around you?” She also wanted to understand how people maintained their notion of faith in the context of such suffering.

Faust said that, surprisingly, the scholarly work inspired her.

“I actually didn’t find it depressing; I found it somewhat uplifting,” she told the students, adding that she was moved “by people’s resilience and courage and their ability to define meaning in a situation that defied meaning.”

One of her most dramatic research moments came, she said, while she was holding a soldier’s bloodstained letter to his father, written as he lay dying. In it, the man tells his father he knows he will be “delighted” to get the letter.

“That word ‘delighted’ is so striking there and reminds us that for a father who has lost his son in the Civil War, to know how he died, to know where he died — that information and having those last words could produce delight in a situation that we regard only with horror.”