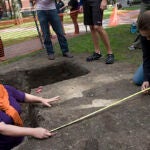 Holy cow! Cox is retiring and 200-year-old tradition is resurrected

Aside from the recent collection of brightly colored chairs, another — albeit fleeting — addition to Harvard Yard appeared Thursday afternoon (Sept. 10): one with a tail and a giant bell around its neck.

In a ceremony to commemorate the retirement of Harvey Cox as the Harvard Divinity School’s (HDS) Hollis Professor of Divinity, a Jersey cow grazed in the Yard adjacent to the Memorial Church, resurrecting a 200-year-old practice.

According to legend, the Hollis Professorship, established in 1721 by London merchant Thomas Hollis, includes the esteemed grazing rights. Cox, who has been with Harvard for 44 years, decided to take advantage of the privilege as he stepped down from the post; he retired from the position in June. Currently the Hollis Research Professor of Divinity, Cox borrowed a cow from The Farm School in Athol, Mass., for the occasion.

Hundreds of onlookers gathered near the steps of the Memorial Church adjacent to Tercentenary Theatre for the occasion. While many came to honor Cox, more than a few were simply there to catch a glimpse of “Pride Faith.” (The cow’s actual name is Pride, but Cox chose the addition of Faith to counter the connection to one of the seven deadly sins.)

A large crowd surrounded the section of grass cordoned off by a small rope, where the caramel-colored cow grazed quietly. They snapped photos with their cameras and cell phones and many reached out to pet the bovine with the giant brown eyes. Some even tried to woo her in their direction by mooing softly.

“I’d always heard the stories of the traditions of cows grazing in the Yard and really couldn’t pass up the opportunity to see one,” said Radcliffe alumna Naomi Shore. “I think it’s great fun.”

The response was just what Cox was hoping for. While the ceremony provided a lighthearted break from the pressures and pace of the early back-to-school frenzy, it also offered something a little more concrete, remarked the professor.

The cow’s presence, Cox told the crowd, represents “how much closer we need to be to the animals that sustain us, to the Earth, the grass, the vegetables. … Perhaps it shouldn’t be such an oddity to see a cow grazing in Harvard Yard. If it happened once, perhaps it could happen again. And if not a cow, [or] a pasture, perhaps then at least a garden,” he said, adding that if the White House lawn could have a garden Harvard Yard surely could.

The band Udderly Tuba took part in the event and played a range of musical selections, including “Fair Harvard” and “Old MacDonald.” The Rev. Professor Peter Gomes, the Plummer Professor of Christian Morals and Pusey Minister in the Memorial Church, praised Cox for his service and noted that the right to graze a cow in the Yard is today the equivalent of the University’s coveted parking privileges.

Following the ceremony at the church, the tuba contingent, Cox, and his cow led a procession to the HDS campus where the celebration continued with additional remarks from HDS Dean William A. Graham and Diana Eck, a member of the faculty of divinity and professor of comparative religion and Indian studies. Harvard’s President Drew Faust stopped by the celebration and scratched the bovine guest of honor behind the ears.

Cox was also an active part of the afternoon’s musical entertainment. Near the end of the ceremony he played tenor saxophone with his swing band, Soft Touch, which was on hand at HDS for the occasion.