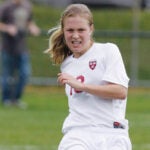 A leader inside and outside the lines

Harvard ‘knit together as one’ by new common calendar

So said Harvard President Drew Faust Wednesday (Sept. 2) during Morning Prayers at Appleton Chapel. “We have chosen a common calendar for the common good,” she said, “a single calendar for one University.”

Following a tradition dating back at least to the 19th century, Faust spoke briefly at the academic year’s first Morning Prayers service. About 60 people were on hand in the compact and serene chapel, sitting in tiered pews of old wood, with creamy latticed arches overhead.

A coordinated calendar across all Schools, concluded a 2004 Harvard report, would ease the logistics of interdisciplinary study. Now that calendar is in place, and the University will be all the better for it, said Faust. “Let us in the year and in years to come think and act on all that means and all that makes possible.”

With Harvard newly joined by a common school year, she reminded listeners of Massachusetts Bay Colony founder John Winthrop, who had imagined his own world “knit together in this work as one.”

Over Harvard’s nearly four centuries, changes in the academic calendar have been “frequent and dramatic,” owing to weather, wartime, and other factors, said Faust.

Along the way, there were “unimaginable oppressions,” she added, warming to a historian’s summary of how things were. One early 19th century calendar, for instance, required classes nearly all summer and that Commencement be held in August.

But oppressions never last. Among Harvard’s “dizzying array” of academic calendars through the years, Faust pointed out, was the one the University just discarded; it had been in place only 31 years.

Still, the new calendar brings diurnal challenges, said Faust. How odd it seems, she reflected, to be back in school when the slant of the sun hints more at summer than autumn.

We return with “sand still in our shoes,” said Faust of the mild disorientation, and “pine needles in our hair.”

Morning Prayers are always a blend of the spoken word and choral music. The first program of the season revealed other messages for returning students and scholars.

For one, the day’s anthem, written in the 18th century by William Billings, resonates today.

It begins with a call to sharpen the tools of perception and communication, as anyone studying might want to do. The first line: “Awake my heart; arise my tongue, prepare a tuneful voice.”