China could meet its energy needs by wind alone 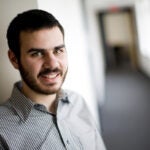 A team of environmental scientists from Harvard and Tsinghua University has demonstrated the enormous potential for wind-generated electricity in China. Using extensive meteorological data and incorporating the Chinese government’s energy-bidding and financial restrictions for delivering wind power, the researchers estimate that wind alone has the potential to meet the country’s electricity demands projected for 2030.

The switch from coal and other fossil fuels to greener wind-based energy could also mitigate CO2 emissions, thereby reducing pollution. The report appeared as a cover story in the Sept. 11 issue of Science.

“The world is struggling with the question of how do you make the switch from carbon-rich fuels to something carbon-free,” said lead author Michael B. McElroy, Gilbert Butler Professor of Environmental Studies at Harvard’s School of Engineering and Applied Sciences (SEAS).

China has become second only to the United States in its national power-generating capacity — 792.5 gigawatts per year with an expected future 10 percent annual increase — and is now the world’s largest CO2 emitter. Thus, added McElroy, “the real question for the globe is: What alternatives does China have?”

While wind-generated energy accounts for only 0.4 percent of China’s total current electricity supply, the country is rapidly becoming the world’s fastest-growing market for wind power, trailing only the United States, Germany, and Spain in terms of installed capacities of existing wind farms.

“To determine the viability of wind-based energy for China we established a location-based economic model, incorporating the bidding process, and calculated the energy cost based on geography,” said co-author Xi Lu, a graduate student in McElroy’s group at SEAS. “Using the same model we also evaluated the total potentials for wind energy that could be realized at a certain cost level.”

Specifically, the researchers used meteorological data from the Goddard Earth Observing Data Assimilation System (GEOS) at NASA. Further, they assumed the wind energy would be produced from a set of land-based 1.5-megawatt turbines operating over non-forested, ice-free, rural areas with a slope of no more than 20 percent.

“By bringing the capabilities of atmospheric science to the study of energy we were able to view the wind resource in a total context,” explained co-author Chris P. Nielsen, executive director of the Harvard China Project, based at SEAS.

The analysis indicated that a network of wind turbines operating at as little as 20 percent of their rated capacity could provide potentially as much as 24.7 petawatt-hours of electricity annually, or more than seven times China’s current consumption. The researchers also determined that wind energy alone, at around 7.6 U.S. cents per kilowatt-hour, could accommodate the country’s entire demand for electricity projected for 2030.

“Wind farms would only need to take up land areas of 0.5 million square kilometers, or regions about three-quarters of the size of Texas. The physical footprints of wind turbines would be even smaller, allowing the areas to remain agricultural,” said Lu.

By contrast, to meet the increased demand for electricity during the next 20 years using fossil fuel-based energy sources, China would have to construct coal-fired power plants that could produce the equivalent of 800 gigawatts of electricity, resulting in a potential increase of 3.5 gigatons of CO2 per year. The use of cleaner wind energy could both meet future demands and, even if only used to supplement existing energy sources, significantly reduce carbon emissions.

Moving to a low-carbon energy future would require China to make an investment of around $900 billion (at current prices) over the same 20-year period. The scientists consider this a large but not unreasonable investment given the present size of the Chinese economy. Moreover, whatever the energy source, the country will need to build and support an expanded energy grid to accommodate the anticipated growth in power demand.

“We are trying to cut into the current defined demand for new electricity generation in China, which is roughly a gigawatt a week — or an enormous 50 gigawatts per year,” said McElroy. “China is bringing on several coal-fire power plants a week. By publicizing the opportunity for a different way to go we will hope to have a positive influence.”

In the coming months, the researchers plan to conduct a more intensive wind study in China, taking advantage of 25-year data with significantly higher spatial resolution for north Asian regions to investigate the geographical year-to-year variations of wind. The model used for assessing China could also be applied for assessing wind potential anywhere in the world, onshore and offshore, and could be extended to solar-generated electricity.

Yuxuan Wang, associate professor in the Department of Environmental Science and Engineering at Tsinghua University in Beijing, also contributed to the study. The team’s research was supported by a grant from the National Science Foundation (NSF).