Bringing science back to Liberian classrooms 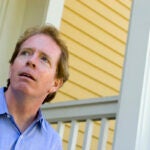 Adam Cohen and Ben Rapoport needed materials to conduct a science experiment, but supplies were hard to come by.

Cohen, assistant professor of chemistry and chemical biology and of physics in the Harvard Faculty of Arts and Sciences, and Rapoport, an M.D./Ph.D. student at Harvard Medical School and the Department of Electrical Engineering and Computer Science at the Massachusetts Institute of Technology, were in the West African nation of Liberia, devastated by two civil wars that stripped its classrooms, leaving teachers and students with few resources beyond the desire to learn.

So Cohen and Rapoport went shopping for limes.

A short time later, after a trip to the open-air market, they had what they needed: limes, metal nails, and copper wire. Soon they were demonstrating how to make a simple battery to Liberian science teachers, daring them to feel the small electrical current on their tongues, and offering a hands-on illustration of scientific principles that across the war-devastated nation are taught mainly through lecture and memorization.

“That’s what we want to do, teach relevant science and make it self-sustaining,” Rapoport said.

Liberia presents fertile ground for Cohen and Rapoport’s efforts. The nation, founded in 1847 by freed American slaves, was torn by two civil wars that began in 1989 and ended in 2003. The wars killed hundreds of thousands, generated tales of beheadings, torture, and other atrocities, and devastated the nation’s infrastructure.

Though the fighting has been over for several years, its effects are still apparent.

During their two weeks in Liberia in June, the two scholars were struck by the bare classrooms and stripped labs — even metal drawers were taken for sale as scrap. The years of war had seen schools abandoned, leaving nearly a generation of adults with little education. During the war, soldiers took what they needed, removing metal from buildings not damaged or destroyed in the fighting, killing livestock, and burning rubber trees for charcoal.

“Education is the one thing you can’t steal from people,” Cohen said. “People are very open to new ideas there and there’s a tremendous amount to do.”

During the course of their trip, Cohen and Rapoport visited the University of Liberia, the Ministry of Education, several civic groups, and 10 schools, doing some classroom teaching but mainly focusing their efforts on providing science training for the teachers.

The two strove to make their presentations as hands-on and relevant as possible, demonstrating several simple experiments that could be done with local ingredients. For example, they showed faculty and students how to extract DNA from local produce using kitchen utensils as laboratory equipment and easily obtained chemicals, such as soap, salt, and rubbing alcohol, as reagents.

They also added a nutrition module after seeing the distended bellies of children across the countryside, a sign of protein deficiency. Protein-rich foods are available, though they’re not typically given to children. Meat, for example, is considered a food for men, Rapoport said, but nuts, beans, and eggs are all available locally and would add protein to a child’s diet.

Most schools had little by way of laboratory equipment. What was there was often locked away unused or broken in a way that might be easily fixable, if parts were available. At one school though, the pair came upon a padlocked and unused laboratory, complete with scales, beakers, and microscopes, some of it still bound in packing material. When the two asked to get inside, the headmaster had to send for a key to open the heavy metal doors.

The teachers didn’t know how to use the equipment, which was coated in a layer of dust, so Rapoport and Cohen conducted an impromptu lesson on basic laboratory skills, weighing a cell phone and different liquids to spark a discussion of density. It wasn’t long before a few students entered, then more, and the lesson eventually drew 30 students into the unused room.

“There was this beautiful lab, all laid out, but it had never been used,” Rapoport said.

Wherever they went, the complaints from science teachers were the same: no equipment, teaching that was theoretical and by rote, and a lack of job prospects in scientific fields that keeps student interest low. The two stressed that science learning isn’t only important if one wants to be a doctor or scientist. How to gather and analyze information is important in a host of fields.

“For me, part of science education was memorizing facts, but a big part of it was fostering inventiveness,” Cohen said.

Though this year’s trip was exploratory, Cohen and Rapoport are already thinking about what to do next. They’ve begun constructing an online journal, The Liberian Scientist, in an effort they hope will not only provide a showcase for what science is being conducted in the nation, but also help build the scientific community there.

Though computer equipment does exist, much of it is broken or heavily virus-infected, Cohen said. He’s thinking of purchasing USB flash drives, loading them with antivirus software, open source software such as Open Office and Wikipedia, and perhaps electronic versions of key texts, such as medical books, and sending them over. He and Rapoport are also talking about returning next summer, spending more time in focused workshops aimed at teachers.

Repaying a debt to Liberia

Cohen and Rapoport trace their Liberia interest back to Hunter College High School in New York City. While there, they met Asumana Randolph, a science teacher originally from Liberia who worked as a technician in the science labs and adviser to the science club. The two learned a lot from Randolph, who stayed connected to his large family in Liberia and who often shipped home needed materials. Randolph founded the I-Help Liberia Project, got the school involved, and brought some high school students back to Liberia with him.

Randolph said it was gratifying to see two former students take up the cause to help Liberia, particularly since he had always preached that, as a scientist, one should not live in a world bounded by a laboratory, but reach out and help people as well.

In this case, Randolph said, Cohen and Rapoport are tackling a task critical to Liberia’s future because science underlies all development.

“If you talk about transportation, you’re talking about science. If you talk about public health, you’re talking about science,” Randolph said. “If you want to look at Liberia for the next 10 years to come, you have to look at the science curriculum and teach students how to think for themselves. Development in Liberia cannot happen without a strong science background.”