Harvard Board of Overseers election results 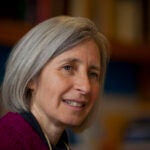 Photeine Anagnostopoulos (New York, N.Y.), chief operating officer of the New York City public schools. She received her A.B. from Harvard College in 1981 and her M.B.A. from Harvard Business School in 1985.

Joshua Boger (Concord, Mass.), founder and former chief executive officer of Vertex Pharmaceuticals, a global biotechnology company based in Cambridge. He received his bachelor’s degree from Wesleyan University, then his A.M. (1975) and a Ph.D. (1979) from Harvard.

Walter Clair (Nashville, Tenn.), clinical director of cardiac electrophysiology at the Vanderbilt Heart and Vascular Institute and faculty member at Vanderbilt University Medical Center. A 1977 graduate of Harvard College, he also holds an M.D. (1981) and an M.P.H. (1985) from Harvard.

Cristián Samper (Washington, D.C.), director of the Smithsonian Institution’s National Museum of Natural History. He received his bachelor of science degree from the Universidad de Los Andes in Bogotá, then did his graduate work (A.M. 1989, Ph.D. 1992) at Harvard.

Five new Overseers were elected for six-year terms. The sixth-place finisher, Joshua Boger, will complete the three years remaining in the unexpired term of Arne Duncan, who stepped down from the Board of Overseers in light of his appointment as U.S. Secretary of Education.

In 2009, there were 10 candidates, eight nominated by a committee of the Harvard Alumni Association, as prescribed by the election rules, and two nominated by certificates from Harvard degree-holders. Degree holders cast 30,383 ballots in the election.

The primary function of the Board of Overseers is to encourage the University to maintain the highest attainable standards as a place of learning. Drawing on the diverse experience and expertise of its members, the Board exerts broad influence over the University’s strategic directions, provides essential counsel to the University’s leadership on priorities and plans, has the power of consent to certain actions such as the election of Corporation members, and directs the visitation process by which a broad array of Harvard Schools and departments are periodically reviewed.