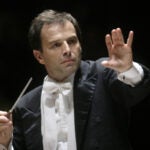 With long, sun-streaked tresses, Sarah Messer doesn’t strike one as a poetess whose work conjures American histories in bewitching, surrealist twists. But Messer’s poems navigate farther and farther from the familiar mainland into a world wholly her own. In “America, the Hallelujah,” a winding poem that nears incantation, Messer plucked each line from an 1852 book of hymnals:

My country ’tis of thee. My God, how endless. My never – ceasing song. Nearer my God to thee. Not let me make. O, come loud anthems. O, I could find. O, for a shout. O, for a thousand.

This Marshfield, Mass.-bred poet, who now lives in Wilmington, N.C., grew up in a historic 17th century house, writes about Jesse James, and is an outlaw herself — an outlaw of poetry.

Messer’s wild, sweeping, electric poems capped off the year’s Radcliffe Fellow Lecture Series during a reading from her new book, “Mouse Oracle,” inside the Radcliffe Gymnasium on Monday (May 18).

Passing out printed broadsides of her poem “Blue,” Messer crafted one fine finale, wiping away tears when discussing how much she will miss Radcliffe and her fellow fellows. But it was her convention-defying poetry that made the afternoon unforgettable, as Messer provided an insightful peek into the unique poetic methods that make her the outlaw she is.

Using “procedural poetics,” which include everything from “exquisite corpse” to “erasures,” Messer does not simply gain inspiration from gazing into a sunlit meadow; she seeks out poetry, hunts it, or, in some cases, it hunts her.

At Radcliffe, Messer unexpectedly found herself entering into a collaborative partnership with her research assistant, John Dillon ’09. “I didn’t have anything for him to do,” she said of the haphazard nature of their early relationship, which eventually led to nearly 20 poems together. For “Blue,” one of their joint works, Messer and Dillon used the “exquisite corpse” technique, which begins with a piece of paper, one person writing a line, then folding the paper so the line is hidden, and, without knowledge of the line’s content, the other person writes a line, and the steps are repeated.

“It’s blind, so you don’t know what the poem is going to be about,” she said. “To complicate that further, we used found language.”

Found language, or lines pulled from texts culled from Schlesinger shelves, included 19th century books on anatomy, hygiene, and electrocution, among others.

For Messer and Dillon, it was magic from the get-go: “You find a person who you can collaborate with and it’s really rare.”

Dillon, Messer’s partner in crime, who will matriculate in the fall to the University of Notre Dame as a Ph.D. candidate in 20th century poetry, read some of their collaborations. “Love Triangle” takes its inspiration from an Ansel Adams photograph but one would never know it, as it features a carrot named Frank who “smokes menthols and really wants to go snorkeling.”

Messer, the author of the poetry collection “Bandit Letters” and the memoir “Red House: Being a Mostly Accurate Account of New England’s Oldest Continuously Lived-in House,” says most of her poems have no real meaning, likening them to something Dada-esque, and told the audience, “The fun thing about surrealism is if you just relax, you’re just like ‘one weird picture, another weird picture.’ … It’s just a different kind of experience.”

The most narrative or digestible of Messer’s poems is the supernatural, skin-crawlingly beautiful “Looking at Satan,” which finds a family’s imagination enraptured with the idea of a fallen Satan:

If Satan was actually here on earth, he would certainly not be my poor father, retreating after the fact to walled cities, selling painted roosters as luck charms in golf resorts.

In “I am the Real Jesse James,” an oblique ranting poem composed on a 1950s Olympia typewriter, Messer recycles words and phrases that blur the lives of Jesse James, a horse, a girl, and the story of a friend of Messer’s sister who got really drunk one night:

I am the real Jesse James. I know you have heard of me. That was what I was supposed to say, the last thought before I turned my head away from him and he flew into a rage. I am the real Jesse James. But I have drunk far too much tonight. And I am just a girl. Perhaps you have heard of his legend? “Never wear rat skin. Don’t point a mirror at the sun. If you lose a tooth, crush it / and throw it into the sky. Never call mice or snakes by their names,” begins Messer’s “Stump Speech,” a compilation of strange instructions, which ends with a vow foxily summing up her haunting, strange, unfathomable work: “I will keep your secret my entire life.”