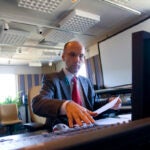 A visit with musician Hans Tutschku

Scholars from around the world will gather at the library this year for four major exhibitions and symposia dedicated to Lincoln’s life and legacy, the artistic impact of the Ballets Russes, a re-examination of Doyle’s place in literary history, and a comprehensive examination of Johnson’s intellectual and creative productions.

“It just so happens that 2009 marks a significant milestone for four of our collections, and we plan to celebrate each fully,” said Tom Horrocks, associate librarian for collections at Houghton Library.

Curated by Horrocks, the Lincoln exhibition and symposium, “Abraham Lincoln at 200: New Perspectives on His Life and Legacy,” opened Jan. 20 at Houghton Library and runs through April 25. The symposium, held April 24-25, will focus on several aspects of Lincoln’s career, such as his views on race and slavery, his role as commander-in-chief, his use of the press to shape public opinion, his relationship with Congress and his influence on the legislative process, and his role as a politician and party leader.

The Ballets Russes symposium and exhibition, “Diaghilev’s Ballets Russes: Twenty Years That Changed the World of Art,” is curated by Fredric Woodbridge Wilson of the Harvard Theatre Collection. The exhibition will open April 15 at Pusey Library and run through Aug. 28. The symposium will run from April 15 to 17, and will focus on the influence of the Ballets Russes on contemporary artistic culture.

Among the prominent scholars who will take part are Joan Acocella, dance and arts critic for The New Yorker; Alexander Schouvaloff, retired curator of the theater collection at the Victoria and Albert Museum in London; Joy Melville, author of several biographies; and Edith Craig, who most recently authored a biography of Diaghilev. Also participating are Harvard professors Thomas Forrest Kelly from the Music Department and John Malmstad from the Slavic Languages and Literatures Department; Toni Bentley, author of “Sisters of Salome” and other books on dance; and Charles Joseph, author of several books on Igor Stravinsky and George Balanchine.

Houghton Library Coordinator of Program Peter Accardo will serve as curator for the Doyle exhibition and symposium, titled “Ever Westward: Sir Arthur Conan Doyle and American Culture.” The exhibition will open May 5 at Houghton Library and run through Aug. 8. The symposium will run from May 7 to 9, and will seek to broaden the understanding of Doyle by examining new biographical studies, exploring the enduring popularity of his canon and revisiting his noncanonical fiction, and historical and social writings, and witnessing Doyle’s literacy legacy as promoted by literary societies and through teaching.

The Johnson exhibition will open Aug. 26 at Houghton Library and run through Nov. 14. The exhibition, curated by John Overholt, assistant curator of the Hyde Collection of Dr. Samuel Johnson and Early Modern Books and Manuscripts at Houghton, will then go on display at the Grolier Club in New York, from Dec. 15, 2009 through Feb. 6, 2010. The symposium will run from Aug. 27 to 29, and will address such topics as Johnson and gender, Johnson and the periodical essay, Johnson and modern scholarship, Johnson and the arts, Johnson and 18th century intellectual history, Johnson and biography, Johnson and literary theory and criticism, Johnson and slavery, and Johnson and his dictionary.