Slavery and conspiracy in old N.Y.

Jill Lepore calls it “one of the saddest, most tragic stories I’ve ever come across. And it’s even sadder because no one’s ever heard about it.”

The story concerns a succession of fires that broke out in New York City in the winter of 1741. Fires were not uncommon occurrences in cities built largely of wood where open flames provided both heat and light and where the most common method of firefighting was the bucket brigade. But there were so many fires in such a short period of time that New Yorkers suspected arson, and, based on some rather flimsy evidence, suspicion fell on the city’s slaves.

The colony’s authorities rounded up hundreds of blacks, all but a few of whom were slaves. Of these, 30 were convicted of a conspiracy to burn down the city, kill the whites, and set up a revolutionary government. Thirteen of them were burned at the stake and 17 were hanged. In addition, four whites, allegedly the ringleaders of the plot, were hanged, and seven more were exiled from the colony.

Lepore, a professor of history, has taught the incident in her course “Liberty and Slavery: The History of an American Paradox.”

“It’s great for teaching,” she said, “because it’s apparent that something very dramatic is going on, but it’s very difficult to understand just what happened. It’s a lesson on what the sources can and can’t tell you.”

But Lepore, whose primary interest as a historian is understanding “the stories people tell themselves to justify cruelty,” decided that the material deserved a more thorough analysis. The result is “New York Burning: Liberty, Slavery, and Conspiracy in Eighteenth Century Manhattan” (Alfred A. Knopf, 2005).

For classroom purposes, Lepore had relied chiefly on transcripts of the trial proceedings and on a self-justifying and probably unreliable memoir of the incident by the city prosecutor Daniel Horsmanden. But for the book, she decided a deeper historical context was needed. She went about assembling a database on New York in 1741, including race, ethnicity, tax rolls, political affiliations, real estate holdings, personal wealth, and court records. She correlated this information with contemporary maps of the city, allowing her to reconstruct a mid-18th century New York in all its most important details. 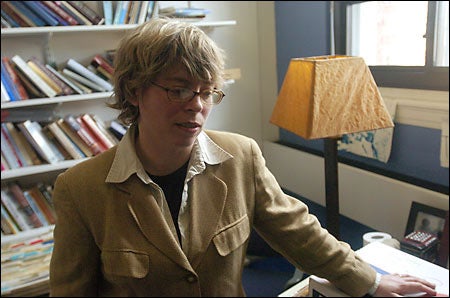 This exercise gave Lepore insights into the nature of 18th century New York society that she would not have achieved otherwise. For one thing, it made her realize how different the institution of slavery was in a city like New York compared with the plantation-based slavery of the South.

“It’s almost impossible to deny people liberty without denying them mobility, and in New York, almost everything the slaves did involved moving from place to place. This made it very difficult to exert control.”

This situation increased the white population’s anxiety about slave uprisings, which were not unknown in the American colonies. In 1733, a group of slaves took control of the Danish island of St. John and held it for six months. Also in the 1730s, a large body of slaves in Jamaica rebelled against their masters and was so successful that the British were finally forced to sign a peace treaty with them. New York had seen violence as well. In 1712, slaves set fire to a building, then attacked the whites who tried to put out the blaze, killing nine.

One of the stories Englishmen told themselves at this time was that slaves were property and that the ownership and enjoyment of property was a right to which every freeborn English citizen was entitled. And yet, Lepore said, there were questions about whether this principle was consistent with Christian principles, questions that allowed fears of slave uprisings to increase to a disproportionate degree.

Was there a slave conspiracy in New York in 1741? This is a question Lepore has still not been able to answer definitively. It is quite possible that some of the fires were deliberately set, she believes, but Horsmanden’s scenario of a citywide conspiracy was almost certainly a fabrication.

Among the most interesting parts of the book are the similarities Lepore highlights between the alleged plot, which was supposedly hatched at a tavern belonging to a shady character named Hughson, and the rituals enacted in gentlemen’s clubs of the period. The 18th century was an era of conspiracies, Lepore contends, some of them serious attempts to overthrow the power structure and others merely diversions accompanied by drinking and merriment. Which category the events of 1741 fall into is still anyone’s guess.

Ultimately, Lepore, whose first book, “The Name of War: King Philip’s War and the Origins of American Identity” won the 1999 Bancroft Prize, does not bring forensic certainty to the mysteries that still hover around this disturbing but little-known incident. However, she does present a fascinating and highly readable portrait of a colonial society still looking toward England for order and identity and yet riven by pervasive fears and tensions.

The story might have been a more satisfying one if she had wrapped the case up once and for all, Lepore said – but the evidence would not have justified such a conclusion.

“The past like the present is messy and complicated,” she said. “I believe it’s important to try to reach a broader group of readers, but not by simplifying what happened.”